More than 160 seventh-graders at Dwight D. Eisenhower Middle School will be starting their summer with new bikes, all thanks to their perfect attendance. Teachers and administrators say that was more than they expected, but the benefits of attendance make it all worth it.
Listen now to WTOP News WTOP.com | Alexa | Google Home | WTOP App | 103.5 FM
(1/5) 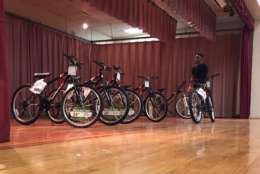 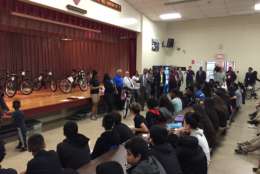 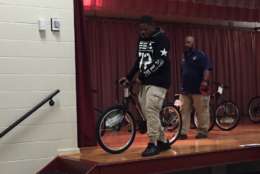 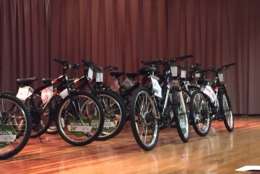 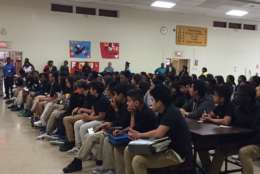 LAUREL, Md. — More than 160 seventh-graders will be starting their summer with new bikes, all thanks to their perfect attendance.

School officials at Dwight D. Eisenhower Middle School, in Laurel, said they offered students a free bicycle at the beginning of the year if they maintained perfect attendance for the school year.

At first, they said they were expecting about 60 or 70 bikes would be given out.

But as the year ended, they realized that 166 students had perfect attendance this school year — almost half the class.

“Seventh grade is definitely that adolescent year where we see a lot of struggles,” principal John Mangrum said, adding that making sure students are in class creates a stronger foundation for future growth.

Students were appreciative of their reward.

“It was hard because sometimes I would be really sick and then I would be like, ‘I don’t want to come to school’ but then at the same time, it’s for a bike,” Angely Garcia told WTOP.

“I just got up in the morning and went to school and that was it,” said Hilce Herring. “I’ve been having perfect attendance since kindergarten, so it’s not really a challenge for me.”

Her sister also got a free bike. She said it was all about helping her classmates also achieve perfect attendance.

“For them, it’s really not easy, so I try to help them out the best I can,” Hilea Herring said. “Trying to go to class on time, getting up early, getting ready and not trying to skip class.”

Their father, Hilton Herring, was also at the school for the assembly — and to take the two bikes home. For him, it’s a proud moment.

“It’s showing that they are disciplined, being respectful and care enough about their instruction at school and at home,” Herring said. “That’s discipline. We instilled that in the early school days. Actually, they are so disciplined that they get up themselves to go to school.”

The improved attendance is noticeable, and teachers and administrators are happy to see it.

“When students come to school, they are able to get the academic instruction that they need; they are able to be on grade level with other students and overall thrive when it comes to their education,” said Arianne Haydel, a counselor for seventh-grade students at the school.

“Sometimes coming to school can be a drag for middle school students, and just having something to push them is awesome.”

The incentive proved to be a worthy motivator for the students — something other students saw themselves.

“I think they changed because of the bicycles,” Garcia reflected. “Not everyone, but some did.”

With the school year almost over, the students are looking forward to their new rides for the summer.

“I think I’m just going to the library to play basketball, and I can be home on time now. I don’t have to walk all the way back,” Anthony Aguilar said.

With so many new bikes hitting the street, administrators are looking into adding a few more bike racks in front of the school to handle the extra traffic.

The 166 bicycles and helmets were donated by Tischer Acura.