What are friends for? A volunteer EMT saved the life of his friend, an EMT and Prince George's County police officer, earlier this month. They've known each other since the were 7. "I'm sure he'll save me one day," the EMT said.
Listen now to WTOP News WTOP.com | Alexa | Google Home | WTOP App | 103.5 FM
(1/5) 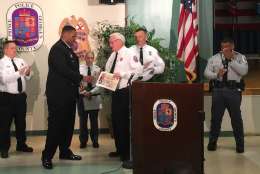 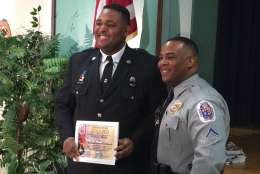 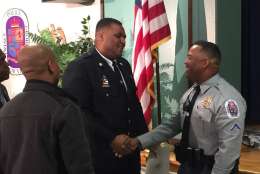 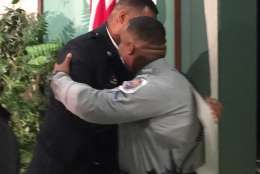 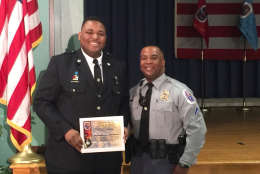 PALMER PARK, Md. — Friends since they were 7 years old in the Seat Pleasant Junior Police program, the bond two local men share is now even more special — one has helped save the other’s life.

“I’m just grateful for Phil,” said Prince George’s County Police Officer First Class Ricardo Biddy, 26. “You know, if it wasn’t for him, I don’t know what — what would have happened,” he said, his voice cracking.

It happened March 3, after they finished up a shift at the Seat Pleasant Volunteer Fire Department, where each of them is an EMT.

Martin was finishing up some paperwork at the firehouse and chatting on the phone with Biddy, who was driving home.

Martin said his friend became oddly incoherent, then silent. “And then moments later I begin to hear what sounded to me like someone throwing up or vomiting,” Martin recalled.

Martin called the County’s Public Safety Communications, reported Biddy’s police ID number, cruiser number and the area he might be in.

Biddy was in his department-issued police cruiser because he had gone to the volunteer fire department immediately after his work shift.

Martin said he never hesitates to call 911: “You can turn them around once they’re on the way, but you can’t start them when it’s too late.”

Aware of two paths to Biddy’s home from the fire house, Martin jumped into his own car and began to look for his friend — finally finding Biddy parked with the car idling in the driveway of his home, unconscious from carbon monoxide poisoning.

Martin pulled his friend out of the vehicle and began first aid. He was happy to see the police and the fire department arrive to take Biddy to the hospital.

“I’m sure he’ll save me one day; I’m sure he will,” Martin said while he and Biddy laughed.

The Prince George’s County Police Department said the carbon monoxide leak in Biddy’s car was from a cracked manifold — a problem isolated to his cruiser, which now has been repaired.