The request came the same day Prince George's County School board met to discuss the county's embattled Head Start program and the day after schools chief Kevin Maxwell asked his chief of staff to resign. At least one board member said he would call for Maxwell's own resignation.
Listen now to WTOP News WTOP.com | Alexa | Google Home | WTOP App | 103.5 FM

The federal report said county Head Start educators used corporal punishment and humiliation to discipline students, including forcing a 3-year-old to mop up his own urine after an accident and ordering children to hold heavy boxes over their heads when they misbehaved.

Since the allegations came to light, an out-of-state company has been running the county’s Head Start program, which provides early education programming for more than 930 students between ages 3 and 5.

Maxwell said he also requested a separate review of “internal communications and employee and labor relations protocols” at all Prince George County Public Schools, which have been rocked by a string of allegations of neglected and mistreated students.

The second review will be carried out by school superintendents from across Maryland, he said.

“Our significant gaps in these two areas are hindering our efforts towards full accountability, transparency and responsiveness to incidences of suspected child abuse, neglect and inappropriate conduct,” he said.

Prince George’s County school board member Edward Burroughs has been critical of Maxwell’s handling of the loss of a $6 million Head Start grant and allegations of abuse and neglect by school staff members. He told WTOP he would push for Maxwell to resign.

On Wednesday, Maxwell announced he asked his chief of staff, George Margolies, to step down.

Although Maxwell did not disclose a specific reason for Margolies’ departure, emails obtained by WTOP’s broadcast partners at NBC Washington show Margolies argued with school board members over keeping Head Start issues off the board’s public agenda.

The school system has been plagued this year by a series of scandals involving alleged abuse of students.

Earlier this year, a 22-year-old former teacher’s aide at Judge Sylvania Woods Elementary was arrested and faces numerous counts of sexual abuse and child pornography charges after police said he coerced nearly two dozen children into performing sex acts on him and each other.

Baker, the Prince George’s County executive, told reporters Thursday morning he still has confidence in Maxwell and doesn’t think he should resign.

Baker, however, has said there’s a culture in the school system that needs to change

“I believe he’s the person that can make those changes,” Baker told reporters. “That’s why I’m sticking by him

Baker, who appointed Maxwell and has authority over who runs the school systems, said his office will closely monitor Maxwell’s performance, including holding daily meetings with the schools chief. 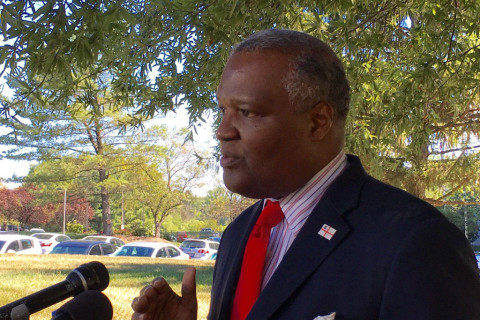