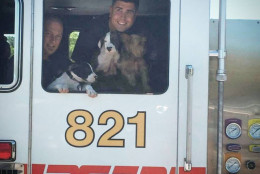 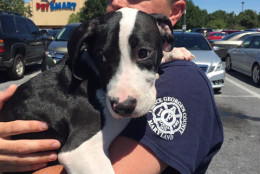 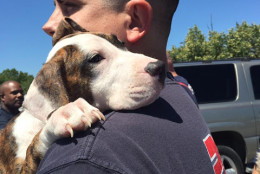 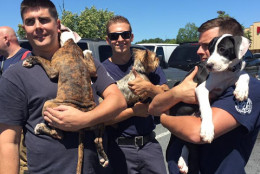 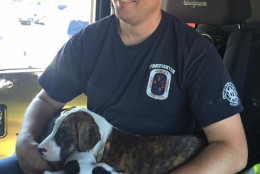 WASHINGTON — Prince George’s County firefighters are calling it a “Dog day of summer” after giving three dogs a ride home aboard a fire truck in Oxon Hill, Maryland.

It started Saturday morning outside a Home Depot in Oxon Hill. Firefighters showed up to check on a man complaining about chest pains, but they learned he wasn’t really sick.

Instead he told firefighters “he had been drinking and he was intoxicated,” according to fire department spokesman Mark Brady.  They tried to offer him a ride to get checked out by doctors, but it turns out he just really wanted to go home.

“But we couldn’t just let him drive away in his condition,” said Brady.  Police convinced the man to walk, but Brady said there was some concern about him walking home with the three dogs.

“So the firefighters offered to take the three dogs home with them on board their fire engine,” Brady said. “They did so. The dogs were very good-natured. They seemed to enjoy the ride in the different type of vehicle.  Holding their heads out the window of a fire truck is something different you don’t see every day going down the road.”

The good news is everyone got home safely — but that’s not where the story ended.

While firefighters were in that parking lot, “they noticed another vehicle that had a dog inside … unattended,” Brady said.

And even on a comfortable summer day outside, Brady said, “It’s still very dangerous to have anyone, either a person, a child, or a pet, left inside an unattended vehicle with all the windows rolled up.”

A firefighter was prepared to smash open a window for the dog, who Brady says appeared to be in some distress, when another firefighter found one of the doors unlocked.

They let the dog out, gave it some water and waited for the car’s owner to come back.

“Firefighters explained to the car owner the danger of what they did,” Brady said.

“I believe the message was received loud and clear,” Brady added.