"We're tired of hearing the tragedies of both violence and accidents and kids getting guns and shooting other kids," says John Jenkins, pastor of First Baptist Church of Glenarden, in Upper Marlboro, Md., where the event was hosted.
Listen now to WTOP News WTOP.com | Alexa | Google Home | WTOP App | 103.5 FM
(1/3) 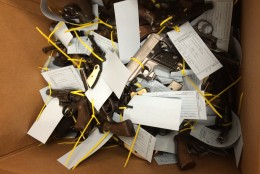 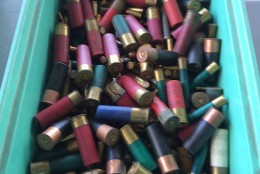 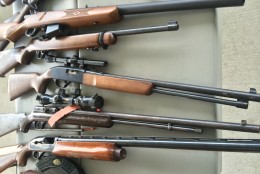 UPPER MARLBORO, Md. — On Saturday, Prince George’s County police partnered with First Baptist Church of Glenarden, in Upper Marlboro, and its sister church Zion, in Landover, to remove guns from the community.

“We’re tired of hearing the tragedies of both violence and accidents and kids getting guns and shooting other kids,” says Pastor John Jenkins.

The churches raised more than $30,000 to provide gift cards used to exchange handguns, rifles and

shotguns, which are slated for destruction. So many people showed up, the church was forced to restock its supply of gift cards.

“Any one of these guns could fall into the hands of criminal,” says Prince George’s County police Maj. Robert Liberati.

The gun exchange — the ninth organized by police and the faith community in Prince George’s County — also attracted competition at the parking lot entrance.

A federally licensed gun dealer held up signs that said “More cash for guns” and “Wanted Shot Guns and Rifles.” Dave Carlin of Uncommon Arms in Kensington offered to pay $200 or more for some shotguns and rifles.

“The majority of the guns do belong inside to be destroyed,” Carlin says, “but we’re here mainly to find the really historic guns and try to save them from being destroyed.”