WASHINGTON — A truck driver is dead after the tractor-trailer he was driving fell from a Capital Beltway overpass onto the Suitland Parkway in Prince…
Listen now to WTOP News WTOP.com | Alexa | Google Home | WTOP App | 103.5 FM
(1/6) 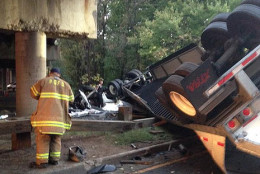 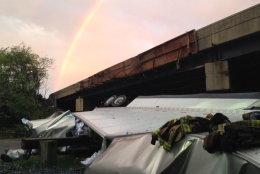 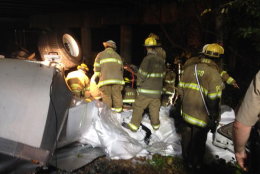 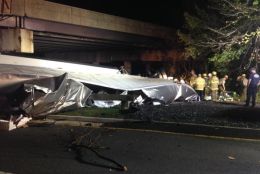 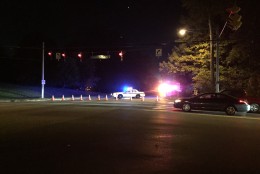 WASHINGTON — A truck driver is dead after the tractor-trailer he was driving fell from a Capital Beltway overpass onto the Suitland Parkway in Prince George’s County Friday morning.

The hourslong crash investigation and cleanup caused traffic delays, which are beginning to dissipate Friday afternoon.

Maryland State Police say the driver lost control on the Outer Loop of the Beltway at about 4:30 a.m., crashed through a guardrail and landed on the Suitland Parkway below. The driver died at the scene.

No other injuries were reported and no other vehicles were involved in the crash.

The truck, which was hauling reams of paper, sustained major damage in the crash. The cab was destroyed and the trailer collapsed on the parkway.

Official say they don’t know what caused the truck to crash and Maryland State Police are investigating.