At the American Democracy Conference, pundits talk Trump, the Electoral College and what's in store for both parties.

WASHINGTON — Both major parties are trying to learn the lessons of the 2016 presidential election. And there are plenty of would-be teachers.

“(Donald Trump) confronted them with the fact that many of their own base voters didn’t want the traditional Republican party platform,” said politics writer Molly Ball of The Atlantic.

Ball predicts more intraparty strife. “You have a disruption of the Republican party’s identity that I think is going to play out in a struggle between Donald Trump and the Republican Congress,” she said.

As for Democrats in 2020, “Will they go for more of a scrapper?” asked OZY.com Editor-in-Chief Carlos Watson. He believes Democrats should find a candidate who can do double duty “both as a charismatic figure and, frankly, as a policy visionary.”

Watson, Ball and several others spoke at the 18th annual American Democracy Conference, sponsored by the University of Virginia Center for Politics.

Looking back on what gave Trump the win and Hillary Clinton the loss, Ball said it came down to the people who stayed home on Nov. 8 — people who were once energized by President Barack Obama in ’08 and ’12.

“That was not a Democratic coalition, it turned out. It was a Barack Obama coalition,” Ball said. “And without Barack Obama — even if he was trying to tell those voters to vote for someone else — they didn’t do it.”

Abramowitz’s major complaint is not with the candidate, but with the system: The Electoral College is “a disaster,” he said, especially for Democrats.

“The concentration of Democratic voters in large urban areas, which is increasing. That’s obviously a problem in House elections and state legislative elections. And it’s compounded by gerrymandering. The fact that every state gets two U.S. senators means that Republicans have an advantage there because most of the less-populous states tilt Republican.”

Proponents of the Electoral College say the unique secondhand method of selecting a president makes for a more cohesive country, contributes to political stability and enhances the status of minority interests.

Abramowitz said, however, that the system gives too much weight to about a dozen battleground states, and that it devalues votes in the rest of the country.

“Turnout is higher in the swing states where there’s a real campaign, where the candidates are engaging in a real get-out-the-vote effort — where both sides are making a serious effort,” he said. “They’re not making a really serious effort in the vast majority of the country. And I think it’s a really bad thing.”

Nationwide, Hillary Clinton won the popular vote by about 2.5 million votes. In comparison, Donald Trump won the battleground states of Michigan, Pennsylvania and Wisconsin with margins of victories totaling about 100,000 votes in the three states combined.

And the three states’ combined 46 electoral votes were the difference in Trump’s 306—232 Electoral College win.

In the first time in the 49 years that the Gallup Poll has asked, less than half of Americans favor replacing the Electoral College with a nationwide popular vote for president. 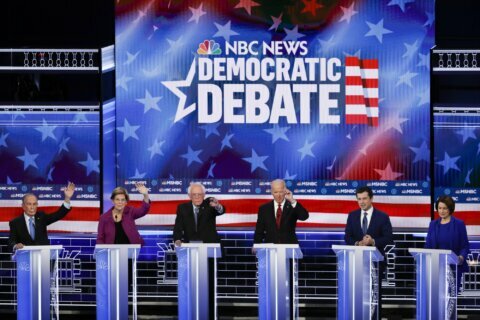