Home » Presidential Election News » These states give the…

These states give the most money to the presidential race

Donors in California, Texas and New York have given the most money to 2016 presidential candidates, proving that although this year’s election is unprecedented in many ways, these three states continue to dole out the most political dough.

The following information is provided by Graphiq and  InsideGov. Donors in California, Texas and New York have given the most money to 2016 presidential candidates, proving that although this year’s election is unprecedented in many ways, these three states continue to dole out the most political dough.

An InsideGov analysis of the most recent data available from the Federal Election Commission found that, as of Feb. 29, fundraising from these three states accounted for $115,059,468. That’s about 39 percent of the $295,561,165 raised so far for official campaign committees. Data reflects contributions from individuals of at least $200 each, according to FEC reporting rules.

California tops the list by far, with $49,322,773 pouring into political campaigns from the Golden State. The majority of that sum — $32,232,968 — went to Democratic candidates, not entirely surprising considering California’s long-held blue state status.

Donors in Texas gave the second-highest amount, at $34,261,498 total, with over three-quarters going to GOP candidates. Republican presidential hopefuls have raised more than $26.5 million from Texas so far this campaign, and more than half of that went to Houston native and Texas Sen. Ted Cruz.

Although New York comes in third overall — with $31,475,197 total coming from the state — it has been the second-most lucrative place for Democrats thus far. Donors in the Empire State have contributed $21,579,317 to Democratic candidates, with most of that going to former Secretary of State Hillary Clinton, who represented New York in the Senate from 2001 to 2009. Businessman Donald Trump, a New York native who has a residence in Manhattan, has raised $144,276 from donors in the state.

Clinton has raised the most money overall, with her official campaign committee bringing in almost $160 million. In addition to winning the money race in New York state, Clinton was also the top fundraiser in California, hauling in just shy of $24 million from that state.

While California, Texas and New York are among the most populous states in the country, thus impacting fundraising totals, political campaigns often benefit from deep-pocketed cities as the primary source of monetary support. Clinton, for example, has collected a ton of money throughout California, but a more in-depth look at her fundraising tallies shows she also received large sums from New York City and Washington, D.C., where she has deep professional and political ties.

Clinton has also collected close to $4.6 million from D.C.-based donors, who range from lobbyists to lawyers to professors. She received $2,700 from Vic Fazio, a former congressman from California who is now a senior adviser at well-known law firm Akin Gump. Robert Stout, the vice president of regulatory affairs at oil and gas company BP America, gave Clinton $2,700. Clinton also got $2,700 apiece from Deputy Secretary of State Antony Blinken and from Christopher Dodd, the current chairman of the Motion Picture Association of America and a longtime Democratic politician from Connecticut who served with Clinton in the Senate.

Clinton has brought in almost $3.8 million from donors in Los Angeles. Although certainly a liberal pocket of the country, Clinton’s ability to find widespread support there reflects a departure from the 2008 election, when Hollywood heavyweights were divided between her and then-Sen. Barack Obama during the contentious Democratic primary.

This year, Clinton has tapped both household names and entertainment executives for her campaign. She’s hit the trail with pop star Katy Perry, who last September contributed $2,700. Amy Poehler, who portrayed Clinton on “Saturday Night Live,” gave Clinton $2,700 last October (and secured a Clinton guest spot on Comedy Central’s “Broad City,” of which Poehler is an executive producer). Will Ferrell, who portrayed former President George W. Bush on “Saturday Night Live” during the early 2000s, also gave $2,700 in February 2016. And Clinton received $2,700 each from IMAX CEO Greg Foster, Live Nation higher-up David Zedeck, GoPro President Tony Bates and Michael Rubel, a managing partner at talent agency giant Creative Artists Agency. Mark Itkin, a Hollywood high-roller who played a significant role in popularizing reality television with series like “The Real World” and “Project Runway,” gave Clinton $5,400 last spring — $2,700 for the primary election and $2,700 for the general election. The CEO of Live Nation, Michael Rapino, has also given Clinton a total of $5,400.

Those fundraising figures from Los Angeles may see a spike next month. George Clooney and his wife, Amal, are slated to host Clinton at their L.A. home on April 16 for a fundraiser for the Hillary Victory Fund, a joint fundraising committee for Clinton’s campaign and the Democratic National Committee. Tickets to the event go for $33,400 per person.

Despite her fast and furious fundraising, Clinton still hasn’t officially tied up the Democratic nomination. Although exceptions always exist, political wisdom commonly held that a campaign with deep pockets led to success — a well-padded bank account meant a candidate could buy ad time, purchase campaign materials like mailers and lawn signs and pay a large team to staff multiple offices and run a strong media operation.

But the exceptional nature of this year’s race has complicated that equation. Vermont Sen. Bernie Sanders continues to draw large crowds and rack up delegates during the Democratic primary.

On what CNN dubbed Western Tuesday last week, Sanders won the Idaho and Utah caucuses. And on Saturday, Sanders cleaned up, winning all three states caucusing — Hawaii, Washington and Alaska. The recent batch of wins puts Sanders at 1,004 total delegates of the 2,383 needed to secure the Democratic nomination. (Despite the latest results, Clinton still holds a substantial lead, with 1,712 total delegates.)

Sanders has brought in close to $140 million total, according to the latest reports from the FEC. When it comes to donations of $200 or more, donors in California and New York have been the most generous to Sanders, contributing a little over $8 million and $3.2 million, respectively. Overall, Sanders has received almost $45.5 million in contributions of $200 or more.

But, as Sanders often points out during his speeches and rallies, most contributions to his campaign are for less than $200 each. Data shows that about 66 percent — or $92,598,033 — of the contributions to the Sanders campaign so far are from small-dollar donations. The campaign is not required to report specifics of smaller contributions, meaning that granular-level data isn’t available on many of Sanders’ donors.

The power of the small donor plays out on the Republican side as well, where GOP frontrunner Trump has found much success. As the above visualization shows, Trump has raised 76 percent of his campaign cash via small-dollar donations — the highest percentage among the candidates still in the race. It’s another data point showing an interesting connection between the Trump and Sanders populist-tinged campaigns. Although Trump and Sanders hail from different sides of the ideological spectrum, they have both successfully tapped into Americans’ frustration with money in politics.

But unlike Sanders, Trump has loaned his campaign a large sum from his extensive personal fortune. Trump has given his presidential campaign a total of about $24.4 million, and $6,850,000 in February 2016 alone, according to FEC reports.

The next campaign finance reports, covering March figures, will be released on April 20. Before then, Wisconsin and New York will host their delegate-rich primaries, on April 5 and April 19, respectively.

More: Why Donald Trump Is Sticking Around

Research More About the 2016 Election 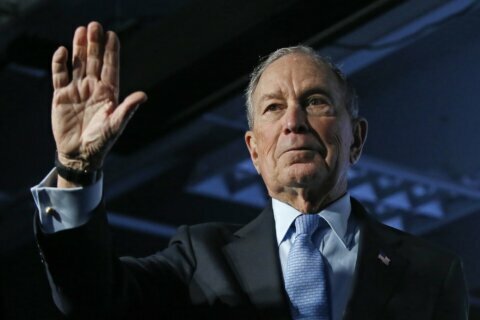 Bloomberg : 3 women can be released on non-disclosure deals

2016 again? Russia back to stirring chaos in U.S. election