Sport? Spectacle? Hot dog eating contest a bit of both

Whether you consider it a sport or not, the Nathan's Famous Hot Dog Eating Contest qualifier this weekend was certainly a spectacle.
(1/7) 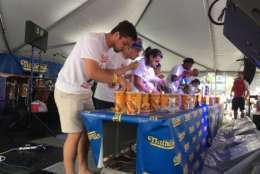 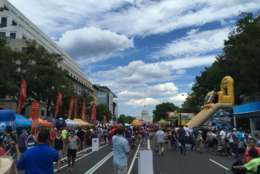 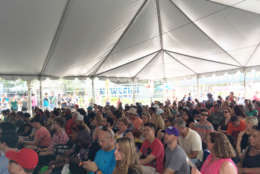 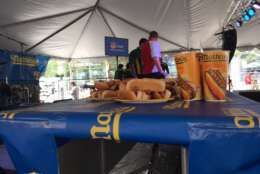 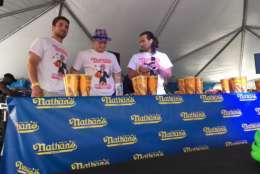 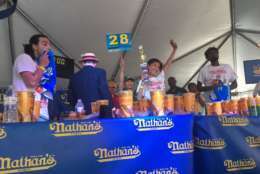 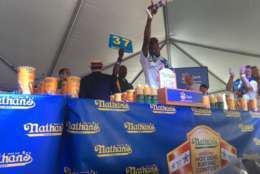 WASHINGTON — Amid lines of vendors and food trucks buttressing both sides of a closed off Pennsylvania Avenue, the most American of competitions is set to begin. In the shadow of the Newseum on Saturday afternoon, nine competitors have gathered on a stage inside the Giant National Capital BBQ Battle for the regional qualifier to the Nathan’s Famous Fourth of July International Hot-Dog Eating Contest.

As competitors huddle in their version of a green room — a small white tent behind the stage — a standing room crowd of several hundred spectators, several wearing giveaway Nathan’s paper boat hats, is in place well before the competition officially starts.

It may seem obvious, but in the enclosed space, the air smells of hot dogs. The same way baseball parks mix fresh cut grass with the wafting scents of the surrounding concession stands, this is the signature smell. There are EMTs here, but their presence is purely precautionary. One has worked a couple Z-Burger competitions and has never had any issue.

In a white shirt, navy tie with red and white stripes, a blue blazer and a straw hat, President of Major League Eating Richard Shea is a presence at every one of these events, now 19 qualifiers across the country. Despite being almost laughably overdressed for the occasion, he comports himself with the level of gravity befitting a hot dog eating contest.

“I just think that it’s nice that here at the capitol, we’ll finally get down to business,” Shea said, as seriously as he can, as the knowingest of smirks tugs at the corners of his mouth. “We’ll champion the spirit of America, and there’s nothing more patriotic than Nathan’s Famous on the Fourth of July.”

As he takes the stage to welcome any and all spectators, his humor walks the line between amusing and tasteless, much like the competition itself. After listing any and every type of relative, he drops his first joke of the afternoon.

“Separated couples, miserable together, but here together as a show of faith for the kids … welcome.”

He jokingly proclaims the sport is not sullied by corporate sponsorship, immediately after pitching Coney Island beer.

Clearly, some of the lines are old standbys — “Their stomachs will be stretched like a pair of Lululemons on a Kardashian,” or, describing one participant: “Eleven words that man has never said: Instead of fries with that, may I have a salad please.”

Shea also raps — yes, raps — and generally stalls as much as possible, giving his prized contestant, who is running late (more on that later), a chance to arrive.

The Nathan’s contest has history as befittingly odd as the event itself. In 1984, it was won by Birgit Felden, a 130-pound, 17-year-old West German judo team member who had never eaten a hot dog before in her life. By the time ESPN was televising the event in 2003, Takeru Kobayashi had stamped his name as the first real superstar of such competitions, breaking the 50 hot dog barrier in a 12-minute competition. Now, Joey Chestnut is the shining star of the circuit, having won nine of the last 10 events. He also set a new record with 73 hot dogs in just 10 minutes at the D.C. qualifier last year.

There would be no such superhuman display this weekend. But it still becomes clear very quickly who was there on a lark and who was there for business. A few local contestants are introduced first and situated at the side of the stage. Standing front and center are Germantown, Maryland’s Juliet Lee, looking to make her 11th appearance at Coney Island, and Gideon Oji, a Nigerian-born 6-foot-9 former center for the Clayton State basketball team up from Atlanta just for this competition.

Oji’s cheeks are enormous. He shoves soaked dogs in their buns in his mouth whole, appearing on the perpetual verge of losing everything — his breakfast, lunch, dinner, dignity, and the competition. Liquid drips off his hands as he tilts over his plate at a 45-degree angle. Watching makes your throat a little tight and your stomach churn. It’s discomfiting, and I can’t be the only one thankful for the booming music, sparing us all the sounds of the competition itself.

Seeing the line of distended bellies that mark the aftermath, the physical regret of this competition, it feels somehow fitting that of any of the local grocers, the affair is sponsored by Giant.

The kids on the end keep plugging, but it becomes clear why they’re not front and center and Oji is. Impressively, a local competitor on the end is putting away his 13th as we enter the final minute, finishing at 14. Oji is busy threatening his personal record of 38. He’ll come up one shy, at 37, an unfathomable number when one stops to think about it, but one he is clearly disappointed by afterward, his hands still damp with hot dog-tinted liquid.

“I did terrible,” he said, his bleached twists swaying as he shakes his head. “I was supposed to do maybe in the 50s, or north of 40.”

He had a reasonable excuse. Unable to find an early enough flight up from Georgia to make the competition, he had to drive up, taking off at 3 a.m. He nearly missed the contest, a friend who joined him for the trip dropping him as close as he could to the gates.

“I didn’t have the materials I need for the fight,” Oji said. “I literally just ran. My buddy tried to find parking. I’m just glad I got the W.”

Lee, meanwhile, cruises past the only other woman in the competition, downing a quiet 28 dogs.

“I could do more,” she mused matter-of-factly afterward. “I will do more in the final. I saved a little space for myself.”

While she didn’t do any specific training for the qualifier, Lee says she’ll probably step things up before heading to Coney Island.

“I should try to get myself in good shape physically,” she said. “Go to the gym a lot, get lots of rest, get strong.”

For the lone competitor from D.C., it’s been an entertaining if humbling experience. John Anderson, who lives in Navy Yard, is a first-and-likely-last time competitor who ended up here the way most of us end up making questionable decisions, thanks to a bet with friends.

“About a month or two ago, I was talking to some of these buddies and I made the bold claim that I could eat 20 hot dogs,” he said after the competition. “And the only way to really prove it would be a contest like this, because nobody wanted to pay for 20 hot dogs.”

So, how did that work out?

“Not well,” he said, after starting strong, but stalling out and finishing at 7.5 dogs, just a half-dog ahead of last place. “I got though the first five pretty quickly, but as soon as I bit into number six, I realized I was not cut out for this.”

Anderson did his homework on how to train — eating a lot of broccoli, running five miles a day leading up to the event — then ignored all of it. He did drink a gallon-and-a-half of water the morning of, but it didn’t have much effect. His main goal, knowing he had no chance to win, was to successfully adhere to Shea’s pre-competition advice.

“He really stressed to us not to puke on stage.”

In that regard, everyone who competed came away a winner on Saturday. 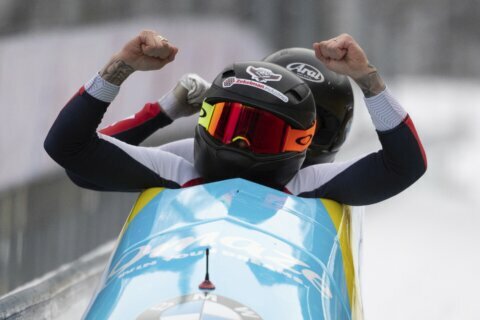 Humphries of US wins to near World Cup bobsled overall title 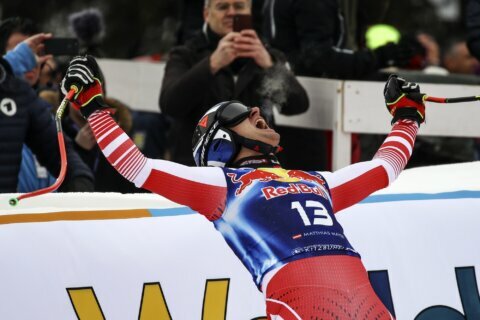 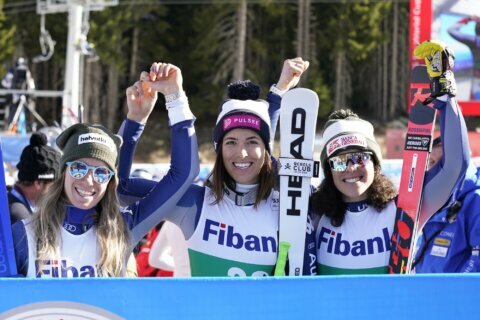