Swimmer Katie Ledecky, who calls Bethesda home, stopped by WTOP on Monday to show off her four gold medals and one silver medal from the Rio Olympics and to talk about what's next for the 19-year-old.
Listen now to WTOP News WTOP.com | Alexa | Google Home | WTOP App | 103.5 FM

WASHINGTON — Bethesda’s Katie Ledecky returned from the Rio Olympics with four gold medals and one silver, as well as multiple world and personal records. Now, the agenda includes getting ready for college and, she hopes, the 2020 Olympics in Tokyo.

Wearing her gold medal for the 800-meter freestyle around her neck, Ledecky told WTOP Monday morning that although she set high goals and met them all at the 2016 Olympic Games, she is already looking forward to setting new goals to reach both at college and maybe the next games.

“I think I’ll get out to Stanford and start setting some individual and team goals there, and maybe for the next year at first and then for the four-year plan. But I know I’ll start looking at the four years and start thinking of what I want to do in Tokyo, hopefully, and have that opportunity,” Ledecky told WTOP.

Since coming home, Ledecky has kept busy. She threw out the first pitch at a Nationals game, and visited Children’s Hospital and her alma mater, Stone Ridge School of the Sacred Heart in Bethesda, to share both her medals and her stories.

“It’s always great when you can put a smile on someone’s face or hopefully inspire someone to dream big,” she said.

Throwing out the first pitch at the Nats game made her a little nervous — having been in front of major crowds before helped, though, she said.

But when she’s in the pool, the game is on. Her coach, Bruce Gemmell, said it’s her drive to win that keeps her reaching for more.

“She certainly is so down-to-earth and so normal. But she’s also competitive in about every single way, in every single thing she does every single day. And that’s a pleasure to work with,” Gemmell told WTOP.

Why did Ledecky skip the Opening Ceremony in Rio? What does she think about when she’s racing? And what are her favorite local spots to hang? WTOP goes umplugged and outside the swim lanes with Ledecky. Check out the Q&A.

This wasn’t her first trip to the Olympics, of course. But Ledecky said that the hype and atmosphere was just as exciting as the London Games.

“You remember how it was four years ago but, at the same time, I forgot how cool the Olympics were until I got there,” Ledecky told WTOP. “You get to interact with people from all over the world, all different sports, just walking to and from different things – the cafeteria, the pool. You could be sitting on the bus next to somebody from Mongolia or something and you get to meet them and talk to them as much as you can. And then, you get to compete against the world’s best also.”

Because she’ll swim for Stanford University this year, NCAA rules state that Ledecky cannot accept any endorsement money, which has been estimated at up to $5 million each year. But she said that she’s not worried about that right now.

“People throw numbers around, but I don’t really pay attention to any of that. And I’m just going to do what I want to do. And that’s compete [in college] and be with a really great team, be with a lot of my friends, go to class with them, learn a lot. And I think that this is what’s going to help me moving forward and I’m excited for what Stanford holds,” Ledecky said.

So what is she going to study? She’s not quite sure yet.

“I’m going to do a little exploring. I think I’m leaning towards psychology or government. Stanford has a number of unique majors that I’ll start exploring once I get there,” she said. 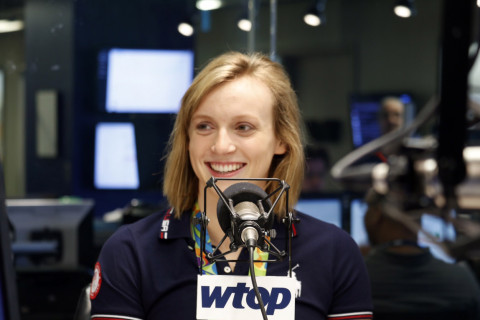 Outside the swim lanes: Q&A with Olympian Katie Ledecky 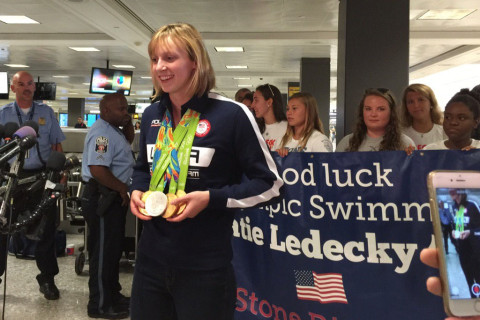