Janne Kuokkanen scored a short-handed goal, Tomas Tatar had a power-play goal and Dawson Mercer and Dougie Hamilton each had one at even strength to help New Jersey win its third straight and improve to 4-1-2 in the last seven games.

“We got a great effort out of all four lines,” Devils coach Lindy Ruff said. “Every line was in on really good solid plays. When we got into trouble we did a good job of collapsing in the zone to get a lot of people in front of the net.”

Blackwood, making his third start of the season, had 16 saves in the first period, 14 in the second and 12 in the third for his first shutout since March 28 at Boston. He beat the Islanders for the third time in eight career starts against them.

“We played a great game, really pressuring them,” Blackwood said. “We didn’t really play on our heels too much. We did a great job of playing the same way and not getting passive when we got the lead. It was a great third period, we didn’t give up too much.”

Ilya Sorokin had 30 saves for the Islanders, who lost their second straight in regulation after a 5-0-2 stretch.

“We have to be a little bit harder on them,” New York coach Barry Trotz said. “We gave up breakaways. We didn’t have enough people on the rope today. … We did enough to generate a goal or two, but we didn’t find the back of the net.”

Sorokin had a stellar save early in the third, doing the splits on an attempt by Tatar, to keep the Islanders within two.

However, Mercer pushed New Jersey’s lead to 3-0 on a 2-on-1 rush as he got a pass from Andreas Johnsson between the circles, went forehand-backhand and lifted the puck over Sorokin for his fourth of the season at 5:46.

Hamilton, back after missing three games with a lower-body injury, fired a slap shot from the top of the right circle to make it 4-0 with 3:27 left. It was his third.

With the Devils leading 1-0 after 20 minutes, Casey Cizikas fired a one-timer from the right side that Blackwood caught in his chest with 7:18 remaining in the second to keep the Islanders off the scoreboard.

“You’ve got to give them credit — the chances we did have they did a good job collapsing,” Islanders captain Anders Lee said. “And their goaltender had a great game. You combine those things, it’s tough to get that momentum.”

Tatar made it 2-0 on the power play as he deflected Hamilton’s shot from the point past Sorokin for his first with 50 seconds to go.

New Jersey got on the scoreboard first. With New York on a power play, the puck came out of the corner and squirted out in front. P.K. Subban fired a shot that was stopped by Sorokin, who also denied Nico Hischier’s follow from the left side. However, the rebound went to the goalie’s left and Kuokkanen quickly put it into an open net for his third with 7:48 left.

“We got the puck from the corner and suddenly we were having a scoring chance,” Kuokkanen said. “Crazy rebound and I was able to score.”

New York had a chance to tie it, but Blackwood gloved Oliver Wahlstrom’s shot from the right faceoff dot with just under six minutes left in the first.

Hischier had an assist for the fourth straight game. … Johnsson has three assists and eight points in his last eight games.

Kyle Palmieri returned to Prudential Center for his first game since he was shipped from the Devils to the Islanders at last season’s trade deadline. There was a video tribute for Palmieri, who spent six seasons in New Jersey, during a stoppage in play in the first period, and the forward raised his stick to acknowledge the cheers.

The Islanders played in the New York area for the only time during their season-opening stretch of 13 straight road games. Their new home at UBS Arena in Elmont, New York, is set to open Nov. 20. Several thousand Islanders fans were in attendance and cheering loudly for their team.

Devils: Host Boston on Saturday to wrap up a three-game homestand. 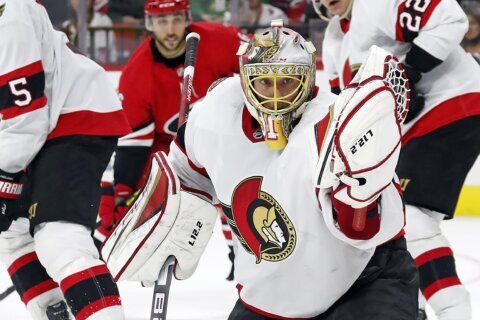