PHILADELPHIA (AP) — Sam Morin was slammed against the boards, suffocated by a mob of his Flyers teammates that smacked his helmet in celebration and wouldn’t let him wiggle free.

Morin’s first NHL goal, yes. A game-winner for a team in desperate need of a win, yes.

The triumph meant so much more for Morin — and his teammates. Morin had persevered through two separate ACL tears, hours of rehab, a futile position switch in attempt to revive his career, and just a handful of NHL games for this highlight.

Morin scored his first NHL goal with 4:27 left in the game to give the Philadelphia Flyers a 2-1 win over the New York Rangers on Saturday.

“It’s been a hard couple of years for me,” Morin said.

Nolan Patrick also scored for the Flyers, who badly needed to win a close one against the Rangers. The Rangers had combined to beat the Flyers 17-3 in their past two meetings.

The Flyers moved into fifth place ahead of the Rangers in the East Division at 16-13-4 — the top four teams qualify for the playoffs — with 23 games left in a shortened season. They snapped a four-game losing streak.

Morin, the 11th overall pick in the 2013 draft, had never scored a point in 14 career NHL games. The Flyers moved Morin from defense to winger and back to defense again over an injury-plagued career.

“I was a bit lost up there,” Morin said of the position change. “I think anyone could tell. I tried my best.”

Morin earned a reputation in the locker room and on the ice as one of the most upbeat Flyers, Coach Alain Vigneault described him as a “good, big, young Frenchman” who stayed ready when his number was called. The Flyers celebrated as if they had won Game 7 of a playoff series when Morin scored perhaps the goal of the season.

“I think that’s why everybody is so happy. When you work so hard, and guys can see it, and you bring his energy every day, no matter if he is in the lineup or not in the lineup, it’s something special and it just rubs off on the guys and we’re so happy for him,” forward Travis Konecny said.

Mike Zibanejad turned New York’s last two wins against the Flyers into laughers and it was almost comical when he scored again with 9:06 left in the first. Zibanejad floated around the crease and fired in Ryan Strome’s pass from the circle for a power-play goal

OK, that number did seem to signify Zibanejad’s goal total this season against the Flyers. It simply marked his career number of games, but seven goals over the last three games against one team is simply astounding.

Zibanejad had three goals and three assists in each of New York’s last two wins against Philadelphia and became the first NHL player ever with six or more points in consecutive games against one opponent in the same regular season. He has only four goals and 20 points in his other 30 games.

The Flyers showed some moxie and pushed back in the second period when they had a 5-on-3 edge for 1:17. Igor Shesterkin smothered two shots during the two-man edge and 2,500 Flyers fans booed when it became a one-man advantage. With three seconds left on the power play, Shayne Gostisbehere stopped a puck with his glove and took a slapper from the point. Patrick deflected the shot for his fourth goal of the season to make it 1-all.

“They came out hot in the beginning and I thought they were throwing pucks on net, they were spreading us in our own zone,” Zibanejad said. “We didn’t really have the opportunity to get down there and didn’t do a good enough job to get the pucks behind them and try to work them.”

Gostisbehere said the Flyers had “lost its identity” in a dreadful March. Carter Hart, who had allowed 16 goals over a three-game losing streak, got the game off. Brian Elliott stopped 24 shots and the Flyers improved to 5-9-1 in March.

“It’s been a great ride for me, something that was definitely unexpected,” Knoblauch said. “It was nice being here in the NHL and having that experience. Great group of guys. This is the youngest team in the league and it’s nice to see the possibilities of where this team is going.”

The Rangers play Sunday in Washington.

The Flyers play Monday and Wednesday in Buffalo. 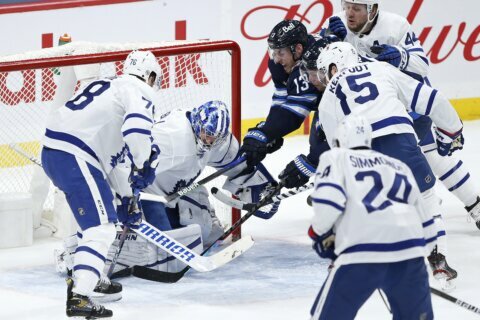 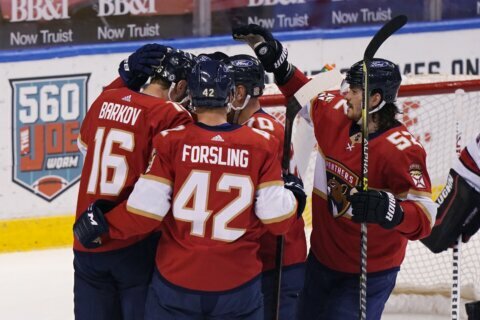 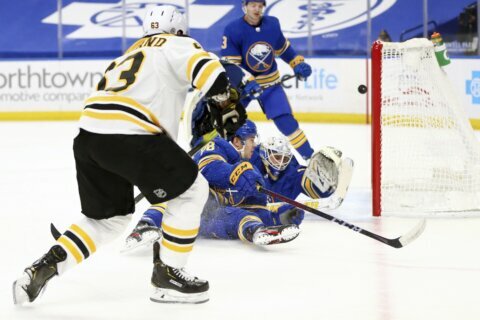