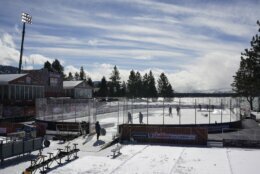 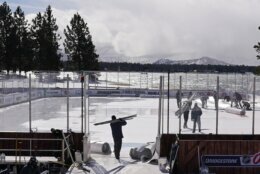 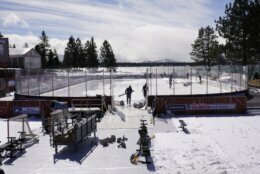 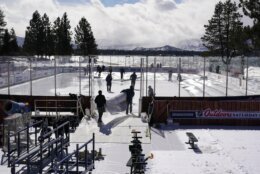 STATELINE, Nev. (AP) — Some players snapped pictures of Lake Tahoe and the majestic Sierra Nevada mountains as they came out for their first look at the picturesque outdoor rink that will host a pair of NHL games this weekend.

Others just soaked in the environment before taking the ice for a practice that took them back to their childhood, when many got started playing hockey on frozen ponds and lakes.

It’s fair to say none of those makeshift rinks was quite like the one that will be used for the games this weekend between Vegas and Colorado and Philadelphia and Boston in one of the most scenic settings imaginable.

“Anywhere where they can build outdoor rinks, there’s always a competition on the street whose dad can build a better rink,” Vegas coach Peter DeBoer said Friday after his team practiced in preparation for Saturday’s game against the Avalanche.

“Every year you come back and someone adds lights or a scoreboard. This is a drop the mic type outdoor rink. It’s the nicest I’ve ever seen. The guys really, really enjoyed it today. It’s awe-inspiring when you walk out there and see the mountains and the lake in the background. The only thing we’re missing is fans.”

They built a rink on the 18th fairway of the golf course of the Edgewood Tahoe Resort, which is located on the shores of Lake Tahoe and surrounded by trees with the snow-covered Sierra Nevada mountain range towering in the background.

“It’s a really cool feeling,” Avalanche captain Gabriel Landeskog said. “The surroundings speak for themselves. You can see that in pictures. But it still doesn’t really do it justice. It’s probably the purest form of hockey, being outdoors and obviously the elements and the wind and the sun comes into play. It’s going to be a lot of fun.”

The Golden Knights practiced first, with DeBoer holding a traditional session before giving his players some 3-on-3 time to mimic what it was like playing outdoors as kids with their friends.

The players spent the practice day getting used to the elements. The ice was in good shape for an outdoor rink but is “stickier” and will play slower than a traditional indoor setting, especially if the sun is shining like it was Friday.

The bigger issues could be the glare from the sun, wind and an elevation of more than 6,000 feet above sea level.

Then there are the distractions of the scenery.

“During the game, I’m sure everyone will be pretty locked in,” Vegas forward Reilly Smith said. “The key to the game will be to try to keep things simple and not stare at the mountains.”

Before the Avalanche and Golden Knights take the ice for the first game at Tahoe on Saturday, the Philadelphia Flyers and Boston Bruins will get a chance to practice on the rink before their game Sunday that wraps up the weekend here.

Bruins forward Brad Marchand said the outdoor setting reminds him of growing up in Nova Scotia, where there was a pond behind his house that became his winter staking rink.

“It’d be pretty special when it would rain and the entire lake could be frozen, but there’d be no snow on it,” he said. “You could skate the entire thing. You did have the scenery, the trees in the background. Obviously we didn’t have the mountains in that kind of view. But we had a great little spot that we could go out and it got cold early on there.”

Flyers forward James Van Riemsdyk is a veteran of the outdoor games, having played in six of the 30 the NHL has held to date. He said playing his first one at Fenway Park with the Flyers in 2010 and then at the Big House at the University of Michigan four years later with Toronto stand out.

But this version will be completely different.

“I think the scenery should be pretty cool,” he said. “Usually these events are at stadiums and stuff like that. Even though it was outdoor, it was a little bit more of a common thing that we’re all generally used to. I know for this one, being on the golf course there will be way different and a totally different vibe in that sense. That’ll make this one special and definitely memorable.”

NOTES: Landeskog, F Tyson Jost, D Samuel Girard and G Hunter Miska have been cleared to return from the COVID-19 list for Colorado, although Miska didn’t make the trip. … Avalanche D Cale Makar (upper body) will be a game-time decision. … Marc-Andre Fleury will start in goal for Vegas.

Sabres’ Eichel ruled out for rest of season with neck injury