Arizona got its first road win of the season in four tries. St. Louis, which had a four-game winning streak snapped, beat Arizona 4-3 on Tuesday.

Mike Hoffman scored twice for the Blues. Hoffman’s first goal with 3:15 left in the game brought the Blues to within 3-1.

Conor Garland had a goal in the second period and Christian Dvorak added an empty-netter in the third for the Coyotes.

Raanta was making his first appearance since Jan. 16 and appeared sharp from the outset.

“Been trying to get that game-type feeling in practice,” Raanta said. “It felt great to be back out there. I was pretty confident.”

Arizona coach Rick Tocchet was pleased with Raanta’s performance despite the 18-day layoff.

“He looked big in the net,” Tocchet said. “Nice job. Got to give him a lot of credit.”

Garland agreed, “He was really good, incredible really,” Garland said. “A lot of saves around screens. Those are hard saves.”

Arizona recorded 11 of the first 12 shots in the game. Pitlick converted off a pass from Drake Caggiula midway through the opening period for a 1-0 lead. Schmaltz pounced on a loose puck in the crease for a 2-0 lead.

“I just think we stuck with it,” Garland said. “Stayed mentally focused.”

“They deserved the game more than we did,” Hoffman said.

St. Louis D Robert Bortuzzo missed his ninth successive game with an upper-body injury from Jan. 15 against Colorado. He was able to participate in the morning skate.

Phoenix D Ilya Lyubushkin made his season debut. He was sidelined with visa problems and also had to spend a week in quarantine.

The Blues wore reverse retro uniforms for the first time this season. The red-based jerseys with blue trim will also be used on Feb 22.

Coyotes: Will play the Blues again on Saturday and Monday. Games scheduled for Saturday and Sunday in Minnesota were postponed due to COVID difficulties with the Wild.

Blues: Will host Arizona again on Saturday and Monday. Games scheduled for Saturday and Sunday against Colorado in St. Louis have been postponed due to COVID issues with the Avalanche. 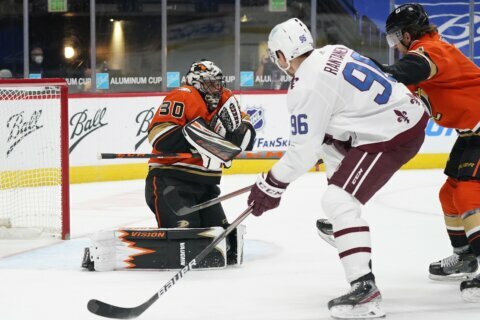