TAMPA, Fla. (AP) — Steven Stamkos and Ondrej Palat had a goal and an assist each, and the Tampa Bay Lightning beat the Chicago Blackhawks 5-2 on Friday night.

Yanni Gourde and Blake Coleman added a goal and an assist and Alex Killorn also scored as Tampa Bay completed a sweep in a season-opening two-game set against Chicago. The Lightning are 16-1-2 against the Blackhawks since the 2010-11 season.

Andrei Vasilevskiy stopped 34 shots for Tampa Bay, which started the season with consecutive victories for the first time since 2016-17 and eighth time in franchise history.

“We’re looking for the effort and the guys have been given an effort,’’ Lightning coach Jon Cooper said. “We know that our structure and our execution and that will get better, but these initial games you want to sneak away with some points and fortunately for us we were able to get four.’’

Alex DeBrincat and Patrick Kane scored for the Blackhawks, and Collin Delia made 33 saves in his first game this season.

Tampa Bay, as it did in a 5-1 win Wednesday, broke out for three goals in the middle period.

Palat got things rolling after Stamkos picked off Delia’s pass attempt behind Chicago’s net and fed Palat coming down the slot for his second goal at 2:25.

“I thought Duncan (Keith) was going to pick it up and curl, then I didn’t see him,’’ Delia said of his turnover. “So I definitely didn’t make the right play. I didn’t make a good, hard pass and that’s what happens when you make mistakes like that in your own zone. It ends up in the back of the net. Rookie mistake on my part.’’

Killorn doubled the lead with his first of the season after taking a pass from Tyler Johnson and wristing a shot to the top corner at 4:43.

Coleman made it 3-0 by swatting a backhand from inside the crease at 8:11. Chicago coach Jeremy Colliton challenged for goaltender interference, but a quick review confirmed no contact on the play and the Blackhawks were called for delay of game for the failed challenge.

“Just get to the blue paint, it’s going to be ugly sometimes and there’s nothing wrong with that,” Coleman said. “Fortunately in the challenge it held up.’’

Chicago cashed in on a man advantage when Dylan Strome found DeBrincat across the ice for a one-timer from the left circle to make it 3-1 at 14:20.

The Blackhawks cut the deficit to one less than two minutes later when DeBrincat fed a backward pass from below the goalline to Kane, who lifted a backhand over Vasilevskiy at 16:11.

“The second period we started turning the puck over, basically self-inflicted wounds allowed them to go up 3-0,’’ Colliton said. “All three were basically off turnovers. To our credit we pushed back, got back into the game and that was a really good sign.”

Gourde regained the two-goal lead when he ripped a half-slap shot past Delia at 13:32 of the third period.

Stamkos capped the scoring with a wrist shot from the right circle with 2:22 left.

SCHEDULE SHUFFLE: After postponing Tampa Bay’s upcoming two games against Dallas on Sunday and Tuesday, the league announced adjustments to the Lightning’s schedule. The game against Dallas originally scheduled for Jan. 17 will now be played May 4, and the second game against the Stars will be played May 10, two days after the season is scheduled to end. In addition, Tampa Bay’s game scheduled for May 4 against Florida will now be played on March 16.

ROOKIE DEBUT: Chicago F Philipp Kurashev, a fourth-round pick in the 2018 draft, made his NHL debut playing left wing on the second line. Kurashev finished with 14:05 of ice time with two shots on goal and a minus-1 rating.

TAXI CALL: Tampa Bay activated C Tyler Johnson and D Luke Schenn off the taxi squad before the game and transferred rookie D Cal Foote, who made his NHL debut on Wednesday, to the group of extra players.

Chicago: At Florida Panthers on Sunday

Tampa Bay: At Columbus on Thursday 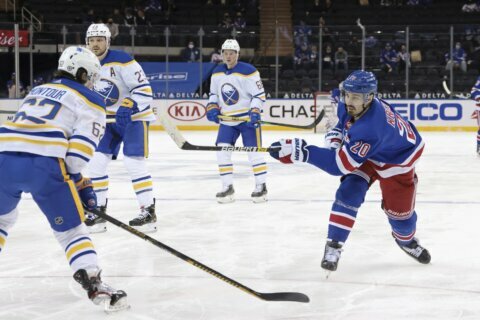 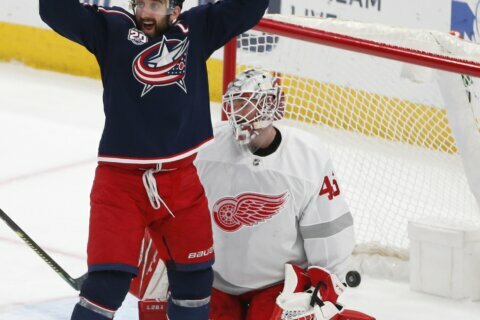