1959 — In the NBA All-Star game in Detroit, St. Louis’ Bob Pettit and Elgin Baylor of Minneapolis become the first co-winners of the MVP award, leading the West to a 124-108 victory.

1979 — Willie Mays is named on 409 of 432 ballots and elected to the Baseball Hall of Fame in his first year of eligibility.

1993 — Mike Gartner of the New York Rangers sets an NHL record when he reaches 30 goals for the 14th consecutive season. Gartner, with three goals in the Rangers’ 8-3 victory over Los Angeles, surpasses Phil Esposito, Bobby Hull and Wayne Gretzky.

2001 — Sam Cassell scores 22 points and the Bucks hit a franchise record 14 3-pointers to beat the Knicks 105-91 and snap New York’s NBA-record 33-game streak of holding opponents to under 100 points.

2011 — Aaron Rodgers runs for a touchdown and makes a saving tackle, B.J. Raji returns an interception for a score and Sam Shields has two interceptions to lead the Green Bay Packers to a 21-14 win over the Chicago Bears in the NFC championship game. The Packers, with road wins in Philadelphia, Atlanta and Chicago, become the first NFC No. 6 seed to advance to the Super Bowl.

2011 — The Pittsburgh Steelers advance to their third Super Bowl in six years with a 24-19 victory over the New York Jets.

2012 — Skylar Diggins matches a season high with 27 points and No. 2 Notre Dame routs No. 7 Tennessee 72-44, holding the Lady Vols to their lowest scoring output in modern school history.

2015 — Klay Thompson sets an NBA record for the most points in a quarter, a 37-point third period that powers the Golden State Warriors to a 126-101 victory over the Sacramento Kings. Thompson makes all 13 shots and finishes with a career-high 52 points. 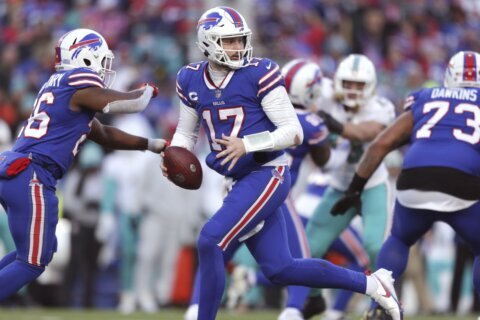