Chargers’ Herbert bruised and battered in 27-24 loss in KC

Herbert was expected to get X-rays after getting crushed by Chiefs defensive end Mike Danna midway through the fourth quarter, but Chargers coach Brandon Staley was quick to say he thought his Pro Bowl quarterback would be OK.

Herbert only missed on play after the hit before gamely trying to rally his team to victory.

“It was just a tough NFL game and he took some big hits. None of those big hits had any impact on him bringing his team back the way he always does,” Staley said. “I think that we’re going to learn a lot more tomorrow, but I think in that area of losing his wind and (an injury) in that area of his body.”

Asked whether he was concerned about Herbert going forward, Staley replied: “No, because he’s Justin Herbert.”

Herbert and the Chargers got off to a good start, building an early 10-0 lead, and the game was still tied when Herbert was intercepted by Jaylen Watson near the Kansas City goal line early in the fourth quarter. Watson took the pick 99 yards the other direction for a touchdown that gave Kansas City a 24-17 lead — its first of the night.

After the teams swapped punts, Herbert was trying to unload a pass to tight end Gerald Everett when Danna came free up the middle and landed on his ribs. Herbert remained on the ground for about a minute while trainers tended to him, then he left the game for a play before telling Staley on the sideline that he was OK to continue.

“I just turned around and saw him on the ground,” Chargers wide receiver Mike Williams said.

Herbert walked out and was promptly crushed between Chiefs pass rushers Frank Clark and George Karlaftis as he threw an incompletion, forcing Los Angeles to punt while still trailing by a touchdown in the waning minutes.

“Our defense hit the quarterback — who is a mobile guy, a great player — to the point that he’s probably pretty sore after the game,” Chiefs coach Andy Reid said later.

The Chiefs added a field goal to stretch the lead, but Herbert kept the Chargers alive when he marched them 73 yards in just over 2 minutes for a touchdown. He took a couple more hits on the drive, but he delivered a pretty throw to DeAndre Carter to convert one fourth down and to Joshua Palmer on another fourth down for the score.

Los Angeles tried an onside kick but the Chiefs recovered and were able to run out the clock.

Herbert, who had won his first two games at Arrowhead Stadium, finished with 334 yards passing and three touchdowns, but he also threw the interception that wound up being the most important play of the game.

The Chiefs had just kicked a field goal to knot the game 17-all early in the fourth quarter when Herbert led his team back down field. He threw a 26-yard strike to Everett to set up first-and-goal at the Kansas City 3, and he was targeting his tight end again when Watson stepped in front of his errant pass and hauled it in.

Before the play, Everett looked winded and appeared to be asking to come out of the game.

Watson took off the other way, made Herbert miss near midfield and cruised to a 99-yard touchdown return that not only gave Kansas City a 24-17 lead — its first of the night — but energized the crowd packed inside Arrowhead Stadium.

“When he’s matched up in the flat, the tight end has the option to come back in. I think Justin was expecting him to come back in on that,” Staley said. “But it’s just one of those unlucky things that happened, and we’ll learn a lot from that.”

Los Angeles went three-and-out on its next possession, then Herbert took the blow that briefly knocked him from the game, putting a bitter end to what had been through three quarters a solid performance by the Chargers on the road.

“I leave here saying that we lost,” Staley said, “(but) I thought that we competed like I expect us to compete.” 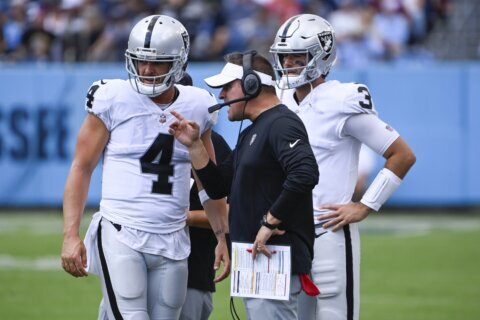 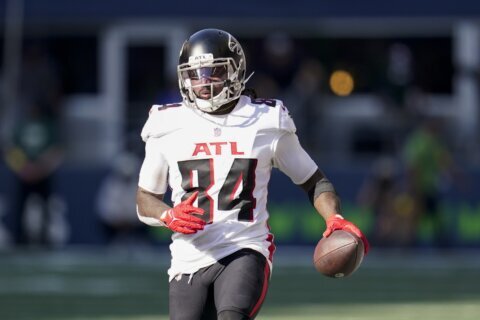 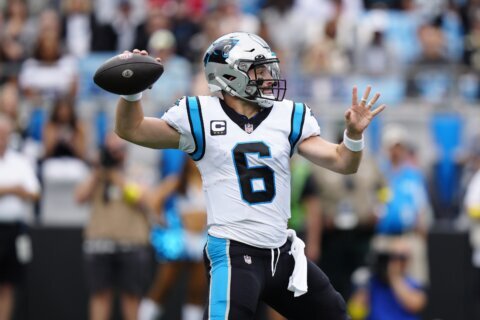