INGLEWOOD, Calif. (AP) — Atlanta has only two players on its roster who played in the 2017 Super Bowl, when it squandered a 28-3 lead to the New England Patriots and lost in overtime.

On Sunday, this young, new group of Falcons nearly made 28-3 mean something entirely different.

Trailing by that score midway through the third quarter against the Los Angeles Rams, the Falcons began their comeback. They were driving for a go-ahead score in the fourth quarter, only to have their hopes dashed when Marcus Mariota’s pass for Bryan Edwards was picked off by Jalen Ramsey in the end zone to preserve the Rams’ 31-27 victory.

“We’ll continue to grow,” coach Arthur Smith said. “Certainly, you go through these things. It’s painful to lose like that and that one possession. But we had the right mindset. We’ll grow and we’ll get better. We’ve got a lot of football ahead of us.

“Obviously, we didn’t make enough plays, but the game plan gave us enough and guys kept grinding out and we had a shot. We had our shot twice. We had a shot in the red zone that got picked by Ramsey and then a Hail Mary.”

The Falcons are 0-2 for the fourth straight season, but have gone through extremes the first two weeks. They squandered a 16-point lead in last Sunday’s opener against the New Orleans Saints before losing 27-26.

“At the end of the day, we’ve got a great group of guys that have a lot of fight, that have the mentality just to continue to take it one play at a time,” said Mariota, who was 17 of 26 for 196 yards with two touchdowns and two interceptions. “This league is weird, man. You’re (going to) find yourself in these close games. We just have to do a better job of finding ways to win them.”

Atlanta dug itself a 28-3 hole due to three first half mistakes.

They got the opening kickoff and went 49 yards before Younghoe Koo was wide left on a 44-yard field goal attempt. Los Angeles would convert that into a touchdown when Stafford connected with Allen Robinson for a 1-yard TD.

Atlanta then turned it over on downs on its next possession when Cordarrelle Patterson was stopped by Bobby Wagner and Greg Gaines on fourth-and-2 at the 50. The Rams took advantage of the short field and scored eight plays later when Darrell Henderson went 8 yards around right guard to make it 14-0 with 9:34 remaining in the second quarter.

It was 21-3 at halftime when Cooper Kupp’s 3-yard TD after Mariota was picked off by Cobie Durant. Another score from Kupp after the Rams got the kickoff to open the second half made it appear as if Los Angeles was going to run away with it, before the Falcons began to rally.

Atlanta also was 3 of 10 on third downs and 2 of 4 in the red zone. However, the Falcons do feel good about the performance of wide receiver Drake London.

London, the No. 8 overall pick in this year’s draft who went to college at Southern California, had eight catches for 86 yards. Playing in front of family and friends, he got his first NFL touchdown in the third quarter on a 4-yard catch during the third quarter.

“It was a quick stick route. I have faith in Mariota to put it in there and keep my safe and score a touchdown. That’s pretty much it,” he said. “Getting my first touchdown in front of my friends and family, in front of my home crowd was fun.

“But at the end of the day, we lost. We are trying to win in this league. That’s all that matters, right?” 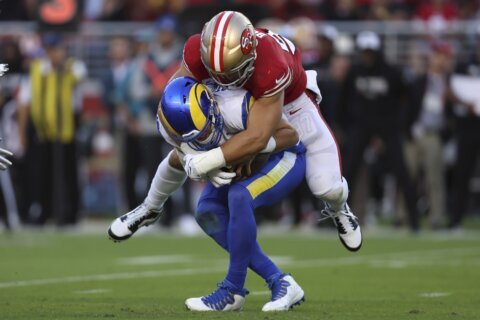 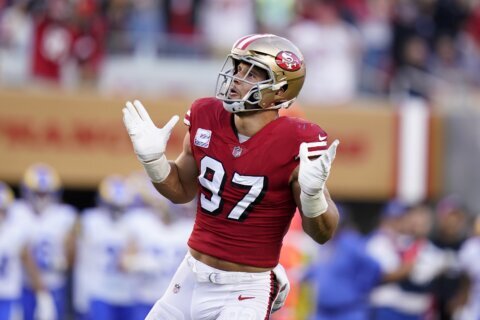 Bosa has no planned celebration for rematch with Mayfield 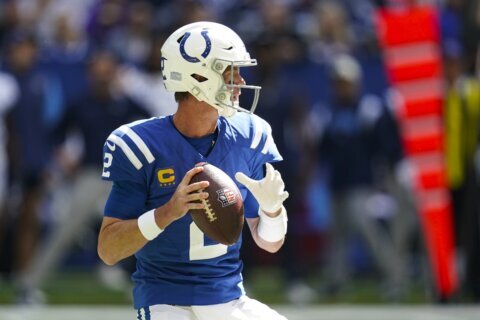