EAST RUTHERFORD, N.J. (AP) — Kadarius Toney’s rookie season with the New York Giants is best described as one great game, one good one and couple of flashes.

It wasn’t what the Giants needed from the first-round draft pick from Florida in a year where expectations were high. The wide receiver finished with 39 catches for 420 yards, no touchdowns and lot of little injuries that limited him to 10 games. They will need a lot more in Brian Daboll’s first season as coach.

While Friday’s practice was only the third of training camp, Toney has been impressive. The thin, 6-footer had a highlight-reel catch over cornerback Aaron Robinson in the corner of the end zone on Day 1 on the pass thrown by Daniel Jones.

It had the fans back at the Giants’ headquarters for camp on their feet.

“It was a conversion route that turned into a fade,” said Toney, who says he has more freedom in the new offense. “It was really all about natural ability, and I went up and made a play, and that’s the mindset.”

Not only were the fans excited, so were his teammates. Some on both sides of the ball ran to the corner to congratulate him. Toney loved it.

“You can make the play a million times and it’s going to be the same every time you see it, you see the ball down there,” Toney said. “Daniel, everybody. The whole team was down there. It was great comradery.”

There were only two games last season where Toney elicted that type of reaction, with the one in Dallas on Oct. 10 being the one everybody remembers.

While the Giants lost 44-20, Toney had 10 catches for franchise rookie record of 189 yards. It broke the mark of 185 yards set by Odell Beckham Jr. in 2014. His only other good game was the week before against the Saints, when he had six catches for 78 yards.

Other than that what stood out for the No. 20 overall pick were two stints on the sideline with COVID-19, as well as ankle, thumb, quad, shoulder and oblique injuries.

During the offseason, there were rumors, the Giants and new general manager Joe Schoen was looking into trading Toney. The 23-year-old, who spoke to Schoen after the rumors surfaced, also didn’t help his cause missing some voluntary offseason workouts. He said it was because of personal reason, without expounding.

The only good thing that came out of the campaign was the Giants picked up an extra first-round draft pick this season in allowing the Chicago Bears to jump from No. 20 to 12 so they could take Justin Fields.

New York used the extra pick to grab Evan Neal of Alabama at No 7, giving it a bookend offensive tackle opposite Andrew Thomas. It took edge rusher Kayvon Thibodeaux at No. 5.

Toney seems to be enjoying himself a little more at camp.

“I feel like I’m more confident, it’s just all about experience,” he said. “Last year, I was just a rookie coming in kind of young and getting to learn everything. This year, second year, so I had experience on the field, had my ups and downs and I’m just here to be who I am.”

Daboll likes him. He played some of the rap music Toney has performed during camp.

“It definitely is a lot of fun out there,” Toney said. “A lot of juice, a lot of energy. I like that they came here honestly.”

If Toney can stay healthy, there might be a lot of juice in the Giants’ offense in 2022.

NOTES: Center Jon Feliciano missed practice Friday after a bout with dehydration on Thursday. … Standing near the bench be tough. Director of Player Personnel Tim McDonnell, the grandson of late Giants owner Wellington Mara, was knocked over by a defender a play near the sideline. He got up quickly. … Daboll allowed safety Xavier McKinney and quarterback Daniel Jones to call defensive and offensive plays, just to allow them to get a feel for it if communications with the coordinators was knocked out. … Cornerback Darnay Holmes intercepted a Jones pass and scored. 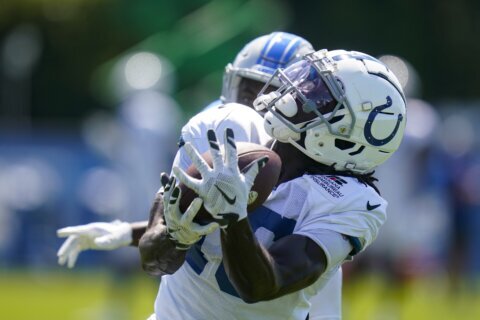