Bills’ D has reason to crow while challenges lie ahead

ORCHARD PARK, N.Y. (AP) — Still stung after being overlooked in the Pro Bowl voting, and seven weeks after one of their lowest moments of the season following a 14-10 loss to New England, Buffalo safeties Jordan Poyer and Micah Hyde decided to get in the last laugh.

Shortly after clinching Buffalo’s second consecutive AFC East title, the two starters were in a celebratory mood leading a parade of defensive backs into the post-game news conference room.

“You all see it!” someone yelled.

“We got all five,” Poyer said referring to the five DBs present, while Hyde placed Tre’Davious White’s No. 27 jersey on the table in honor of the star cornerback who is sidelined with a knee injury.

They had good reason to crow following a 27-10 season-ending win over the Jets on Sunday in which the defense limited New York to four first downs (a Bills franchise record), 53 yards net offense (second fewest in team history) while generating nine sacks (two short of the team record and the most in 10 years).

While their wild-card playoff opponent, division rival New England, had not yet been determined, the moment served as a coming out — or closing out, perhaps — party. When informed the Bills’ defense completed a trifecta in finishing first in the NFL in fewest yards, passing yards and points allowed, Poyer and Hyde playfully asked for someone to repeat those rankings once more.

There’s no disputing the defense has been the team’s constant this season, having played a major role in leading Buffalo (11-6) to its third consecutive playoff berth and fourth in five years.

It also wasn’t lost on those present, including the players, that this was the same room where Poyer and Hyde became upset at being asked if they were embarrassed following a loss in which New England attempted just three passes and trampled Buffalo by gaining 222 yards rushing to offset the blustery, wintry elements.

Which leads to one of the major questions the Bills face entering the postseason — with aspirations of going beyond reaching the conference championship — where Buffalo’s run ended a year ago with a loss to Kansas City.

As they did against the offensively challenged and injury-depleted Jets, the Bills proved more than capable of smothering Jets rookie Zach Wilson. Buffalo finished the season going 7-2 against opposing quarterbacks with 16 or fewer career starts, with their only losses coming against New England’s Mac Jones and Jacksonville’s Trevor Lawrence.

On the other hand, Buffalo went 4-4 against more experienced starters, with losses against Tampa Bay’s Tom Brady, Pittsburgh’s Ben Roethlisberger, Tennessee’s Ryan Tannehill and Indianapolis’ Carson Wentz. Aside from splitting two games against New England’s Jones, the only other playoff-bound quarterback Buffalo defeated this season was Kansas City’s Patrick Mahomes in Week 5.

Another question mark revolves around Buffalo’s inconsistencies against the run. The Bills finished 3-4 when allowing 100 yards rushing, including a 41-15 loss to Indianapolis in which Jonathan Taylor scored five times (one receiving) in the Bills’ most lopsided defeat since Week 5 of last season.

The Patriots, featuring a backfield of Damien Harris, Brandon Bolden and Rhamondre Stevenson, have combined for 372 yards and four touchdowns rushing in two meetings this year.

Happy as he was with the regular-season results, coordinator Leslie Frazier was already looking to what lies ahead.

“It doesn’t get any easier,” Frazier said. “We’ll play some really good offenses, starting with the offense that we’re going to face this weekend.”

Buffalo’s running attack, with RB Devin Singletary combining for 375 yards rushing and five touchdowns (including one receiving) over the past 18 quarters.

Going against the wind. As was the case in the loss to New England last month, Buffalo’s offense went nowhere when facing the wind against the Jets. The Bills punted seven times, gave up the ball on downs and hit a 21-yard field goal in nine possessions which ended with the wind in their face.

With two sacks on Sunday, Poyer finished the season as the NFL’s only player with at least five interceptions and three sacks.

WR Emmanuel Sanders missed his third consecutive game with a knee injury. DE Efe Obada did not play due to an ankle injury.

8-0 — Buffalo’s record this season when scoring a TD on its opening possession.

A Saturday night showdown at home against a Patriots team Buffalo has defeated in three of the past four meetings. 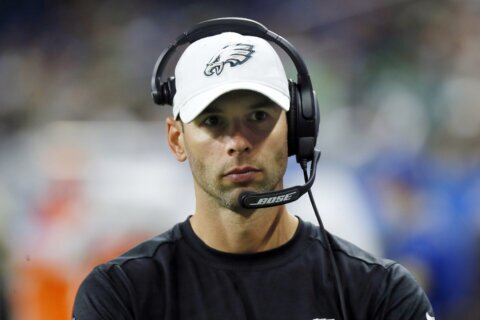 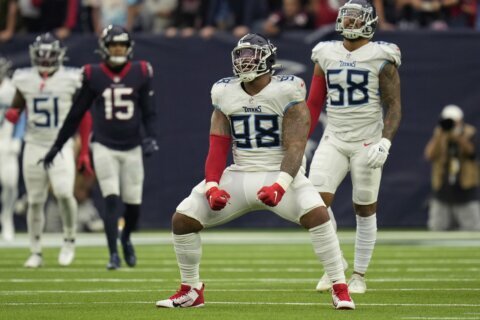