ATLANTA (AP) — Cordarrelle Patterson made sure the Falcons finally produced a 100-yard rusher after they went 22 games without one.

It couldn’t have come at a better time.

Patterson, in his ninth season and first with Atlanta, ran for a career-best 108 yards and two touchdowns on just 16 carries in Sunday’s 21-14 victory at Jacksonville. It was no coincidence that they won after Patterson, the do-it-all running back-receiver-special teams standout, returned following missing one week and part of another game with an ankle injury to help the team snap a two-game skid.

The Falcons (5-6) had been outscored 68-3 in their previous two games, and they clearly weren’t the same offense without Patterson. Now they’re back as a long-shot hope in the NFC playoff hunt.

“I’m a big part of this offense,” he said. “That’s a no-brainer, man. I mean, outside looking in, you can see that. Like I told you before, I love it here. I love when I’m out there on the field. I love competing. I love having fun. That’s just something I’m always doing. When I’m out there, man, I’m going to give it my all. I just love it.”

Coach Arthur Smith was insistent that the Falcons, who began the game ranked 31st in rushing, could run the ball against the Jaguars. He harped on it in practice all week and told his players that it’s a long season and storylines can change.

“That’s what good teams have to do,” Smith said. “That’s why you can live in all these narratives, and they’re all (phony) if you don’t continue to grow and improve. We felt good about it, about the run game, regardless of what statistics and situations, whatever. We kept chipping away and today was a great job by the entire offense running the football.

“Obviously, having C.P. back adds an element. He’s a warrior. He’s a big, physical presence that can do a lot for us, and that’s clear. It was good to have him back.”

The offensive line had its best showing of the season as Atlanta rushed for a season-high 149 yards. Matt Ryan was sacked just once, and that came because of tight coverage in the secondary. Smith decided to switch centers, starting Matt Hennessy as usual but subbing him for Drew Dalman as the game went on. Smith indicated Monday that the rotational plan could extend into this week.

The Falcons have no deep passing threat. Ryan almost never takes a shot downfield. Smith said the reason is the cornerbacks are playing far off, whether it’s in single-high coverage or in variations of two-quarters schemes, and forcing Ryan to complete the ball underneath.

“Certainly, I think it’s a trend in the NFL,” Smith said. “When you see what their game plan is, we’ve got to adapt, and I thought we did a decent job of that yesterday.”

Mykal Walker stepped in for the injured Deion Jones and had six solo stops, 11 tackles overall, one quarterback hit and one pass breakup.

Smith had no update Monday on No. 1 receiver Calvin Ridley, who missed his fifth straight game with mental health issues. Smith cut off two questions from reporters asking whether Ridley might return this season. “When we have an update, we’ll give it to you,” he said.

Top cornerback A.J. Terrell left the game late in the third quarter with a shoulder injury. He didn’t return but said after the game he should be ready for next week. Jones was on the injury report Friday with an ailing shoulder. He had started 47 consecutive games.

3 for 3 — Atlanta scored three TDs in three trips to the red zone.

Keep beefing up the running game and get ready to face Tom Brady and the Tampa Bay Buccaneers this Sunday. 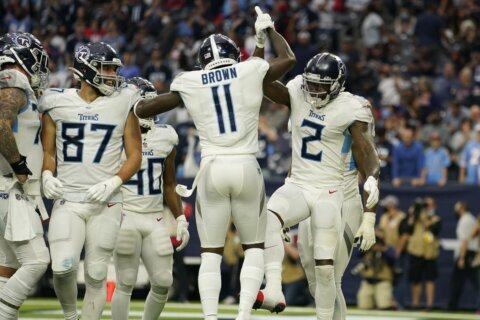