LAKE FOREST, Ill. (AP) — Coming off one of the worst performances by an offense the NFL has seen, things can only get better for the Chicago Bears this week.

The Bears look to pick themselves up when they host the winless Detroit Lions on Sunday in a matchup between teams coming off losses that were gut wrenching for different reasons.

For Chicago (1-2), it was an epic failure on offense in a 26-6 debacle at Cleveland. The Bears ran 42 plays for a grand total of 47 yards, an effort that ranked among the worst the league has seen. It was the ninth-lowest total by an NFL team and the second worst for the charter franchise.

For rookie Justin Fields, it was a nightmare. The No. 11 overall pick got sacked nine times for 67 yards and threw for just 68 on 6-for-20 passing in his first start, with Andy Dalton sidelined because of a bone bruise in his left knee. Fields also hurt his right thumb.

Coach Matt Nagy said Dalton remains the No. 1 quarterback with Fields backing him up and Nick Foles in the third spot. But he announced Friday he will wait until game time to announce whether Dalton or Fields is starting.

Nagy wouldn’t say if he will continue to call plays on offense.

Either way, the heat is on the coach.

“You understand it,” Nagy said. “Do you like it? No, but the competitor in you accepts it. And what my job is now is to help be the greatest leader I can possibly be for these players, right? From the moment they walk in after that game and we lick our wounds, all of us, right, be the best leader I can be to get them ready for Detroit so that we can get back on track.”

They went into the fourth quarter trailing 16-7 and grabbed the lead on Ryan Santoso’s field goal with a little more than a minute remaining, only to relinquish it in agonizing fashion.

On fourth-and-19 from the Baltimore 16, Lamar Jackson threw a 36-yard pass to Sammy Watkins to get the Ravens across midfield with 7 seconds left.

The star quarterback spiked the ball to stop the clock before Tucker hit the longest field goal in NFL history — a 66-yarder that bounced off the crossbar as time expired.

“It’s about being resilient,” coach Dan Campbell said. “It’s about learning from your errors. It’s about not giving up. It’s all of the things and I think that the veterans that we have here that have been retained or that we have brought in believe the way we believe.”

The Lions are seeking their first win under first-year coach Campbell. But quarterback Jared Goff insisted the team isn’t shaken.

“We’re an optimistic group,” Goff said. “We’re a resilient group and I don’t think we’re fazed right now by the past.”

Detroit has lost seven straight since beating the Bears at Soldier Field on Dec. 6, 2020. The Lions had Darrell Bevell coaching on an interim basis in that game after replacing Matt Patricia and Matthew Stafford leading them back from 10 down in the fourth quarter. Stafford finished with 402 yards passing and three touchdowns, helping Detroit to stop a five-game skid to Chicago.

The loss was also the sixth in a row for the Bears, who then won their next three to help propel themselves to the playoffs.

One area working well for the Bears is their pass rush.

Chicago has 11 sacks, thanks to a resurgent Robert Quinn and a strong start by Khalil Mack.

Quinn has 3 1/2 sacks, after finishing with just two in 15 games last season. Mack, a three-time All-Pro, has three after getting nine in his second straight year in single digits.

Goff, drafted No. 1 overall by the Los Angeles Rams in 2016, has empathy for Fields.

“We do this every year where these kids get drafted in the top 10 and we expect them to be the best player in the league right away,” Goff said. “It’s rare. I think you look around the league and how many guys have done that in the last 20 years? I don’t know, one or two.”

No matter who’s calling plays, things have to change for the Bears’ offense. Chicago ranks last in the NFL in yards per game and passing and 31st in points.

Both teams are getting solid contributions from the running backs.

Chicago’s David Montgomery is fifth in the NFL with 203 yards rushing. Detroit’s D’Andre Swift and Jamaal Williams combined for 89 yards rushing and two TDs on 26 carries — and nine receptions for 85 yards — against Baltimore. Swift ranks second among running backs with 19 receptions and fourth at the position with 289 yards from scrimmage. 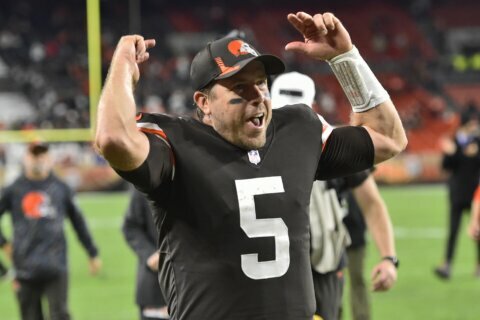