NEW ORLEANS (AP) — The Houston Texans and New Orleans Saints were working toward a trade Wednesday night that would send running back Mark Ingram to New Orleans, where he spent the first eight seasons of his career, two people person familiar with the situation said.

The people spoke to The Associated Press on condition of anonymity because not all aspect of the trade had been completed.

But one of the people said talks were “trending” toward an agreement in principle regarding Ingram’s move back to New Orleans.

Ingram has played in seven games for Houston this season, rushing 92 times for 294 yards and a touchdown. He also has seven catches for 24 yards.

The former Alabama Heisman Trophy winner was drafted 28th overall by New Orleans in 2011. He spent the previous two seasons with Baltimore, where he had his last 1,000-yard season as a rusher in 2019.

Ingram, 31, twice rushed for more than 1,000 yards in a season in New Orleans. He rushed for a career-best 1,124 yards and 12 touchdowns in 2017, the first of two seasons he worked in tandem with Alvin Kamara in the Saints’ backfield.

Ingram’s production dropped sharply in 2018, his last season under contract with New Orleans, and he left for Baltimore in free agency after that.

Ingram appeared on social media to be pleased by word of the trade talks.

When Kamara posted a message about his former teammate rejoining him in the Saints’ backfield, Ingram responded with an emoji of a smiling face shedding a tear and a fleur-de-lis, a symbol associated with French royalty that appears on Saints helmets and uniforms, as well as the official city flag of New Orleans. 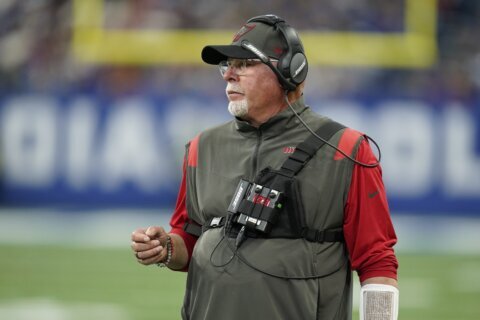