INDIANAPOLIS (AP) — The Indianapolis Colts can easily identify their biggest problem this season. They must become more productive in the red zone.

They need to find a solution quickly.

One week after scoring touchdowns on only half of their four trips in the red zone, the Colts were even worse Sunday — punching it in just once in four more attempts in a 27-24 loss to the Rams.

“Being inside the 5-yard line twice and walking away with no points is frustrating, but we found a way to overcome that and battle back,” Colts quarterback Carson Wentz said after an injured right ankle prevented him from finishing the game. “We’ve got to find a way to score there.”

So far it’s been a futile effort.

Sure, the Colts (0-2) have opened against two of the league’s traditionally strongest defenses — Seattle and the Rams.

And, yes, three-time NFL Defensive Player of the Year Aaron Donald can clog running lanes that might normally be easier to open. That happened on the game’s opening series when Indy quickly moved to the Rams 1-yard line only to get stuffed on three straight runs. Wentz was sacked on the fourth successive play from the 1.

“Very disappointing,” coach Frank Reich said before discussing his decision to quick-snap the ball and call a pass on fourth down. “They were ready for it so it wasn’t coached well enough. We’ve got to get it in from the 1-yard line. We didn’t call the right play and we didn’t execute it and that’s on us.”

Donald made his impact felt the next time Indy got close, too.

This time, Reich called the usually safe shovel pass to tight end Jack Doyle only Donald knocked Doyle off his route just as Wentz started to flip the ball. Linebacker Troy Reeder slipped into the hole where Doyle was supposed to be and snatched the ball before it hit the ground, giving the Rams (2-0) the ball at the 5-yard line.

It was that kind of day for the Colts — and the Rams.

While Matthew Stafford converted three trips in the red zone into touchdowns and the other two into field goals and the defense only allowed the Colts offense to only score two TDs, All-Pro cornerback Jalen Ramsey thought the defense could have been even better.

“We played well in the red zone today,” he said. “I’m being self-critical, but we need to step it up and maybe not let them get in the red zone and put us in those tough situations, which we’ll do. We’ll continue working on those things, but we’re definitely proud of how we played when they did get the ball in the red zone.”

For the Colts, it will be another agonizing week breaking down what went wrong and knowing it needs to improve on a touchdown success rate of 37.5% if they hope to stay in playoff contention. If they don’t get it right things could get worse quickly.

They’ve already lost two home games before heading to Tennessee, Miami and Baltimore the next three weeks and perhaps without Wentz for some or all of the brutal stretch.

But it’s a predicament they believe can be corrected before meeting three more daunting defenses.

“It stinks, it’s on all of us,” center Ryan Kelly said. “I certainly don’t fault Frank for going for it on fourth-and-1. We’ll look and see what we didn’t do as well, but when we go down the field and get in goal line, we’ve got to score.” 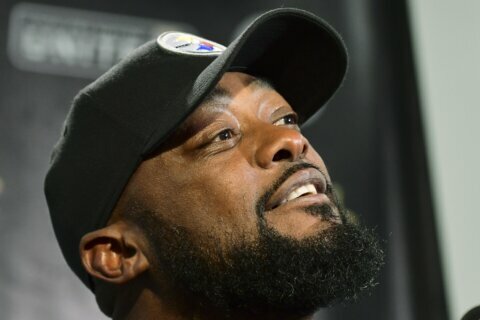