Analysis: Some debuts rocky, others uplifting in NFL Week 1

How difficult is achieving a successful debut in the NFL? Ask Urban Meyer and Arthur Smith, new head coaches whose teams looked as if they were still in spring workouts.

Compounding that, Meyer’s Jaguars and Smith’s Falcons were routed by Houston and Philadelphia, generally projected to be among the league’s worst outfits — and also led by new head coaches.

The first time around was kinder to the Texans’ David Culley, the Eagles’ Nick Sirianni and the Chargers’ Brandon Staley, as well as for some not-quite newcomers to the league but now in different environs: quarterbacks in their first starts for current teams, such as Jameis Winston for New Orleans, Tyrod Taylor of Houston, Teddy Bridgewater of Denver, and Sam Darnold of Carolina.

As for the kiddie QBs, it was a down day: Trevor Lawrence and Zach Wilson, the top two overall selections in the draft, plus first-rounder Mac Jones, all lost.

New England’s Jones performed the best in a 17-16 defeat to Miami. He also had a lot more help than the Jets’ Wilson, who struggled badly in the first half and then came on in a 19-14 loss at Carolina. Lawrence, whose assessment of his performance made him sound like an actor in a Broadway play about to close after one night, was part of that ignominious 37-21 Jags flop in Houston.

“Losing is always hard, especially when you feel like you are prepared and had a great week,” Lawrence said. “I really think we were ready and obviously didn’t play well. It starts with me. I didn’t play well, for sure.

The other two first-rounders, San Francisco’s Trey Lance and Chicago’s Justin Fields, each contributed touchdowns for their clubs.

This season’s seven new head coaches combined to go 3-4 in Week 1. The Jets’ Robert Saleh saw his club victimized by its former QB, Darnold, and by Christian McCaffrey, who was brilliant after a 2020 basically lost to injury. Detroit’s Dan Campbell saw the Lions fall into a deep hole before a stunning comeback but a fruitless outcome as they lost 41-33 to the 49ers.

Opening weekend of the NFL season always is challenging for favorites. That seemed extrapolated this year by the lack of appearances in preseason games for so many regulars. Such projected powers or contenders as Buffalo, Tennessee, Indianapolis and Green Bay were either mediocre or worse.

Belying that, though, were the showings by Winston, Taylor, Bridgewater and Darnold.

Winston was a wizard in replacing Drew Brees, throwing for a career-high five touchdowns. Taylor did perhaps as much as the man he is replacing, Deshaun Watson, might have with his 291 yards and two touchdowns. Darnold threw for a score and ran for one in beating the Jets. Bridgewater completed 28 of 36 passes for 264 yards and two scores, sharing the ball with nine receivers, in a victory at the Giants.

“I saw a guy in total control and when he had to improvise, he did,” Broncos coach Vic Fangio said of Bridgewater. “Some of those were on big, big plays. He’s been doing that his entire career when he’s been a player. He showed it today.”

Jacksonville’s Meyer had the biggest descent, given his credentials. He lost the first season opener of his head coaching career after entering the game having won 17 straight openers as a college coach. 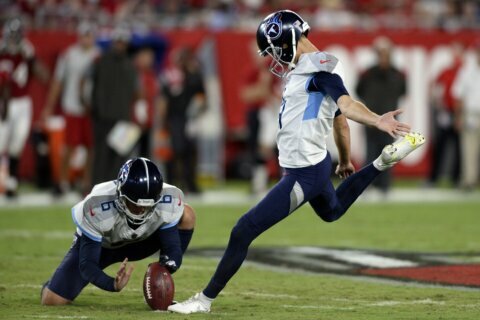