ATLANTA (AP) — Logan Woodside and Matt Barkley each threw touchdown passes to open Tennessee’s backup quarterback competition and the Titans beat the Atlanta Falcons 23-3 on Friday night in the preseason opener for both teams.

Woodside started and threw a 13-yard scoring pass to Cameron Batson in the second quarter. Woodside completed 10 of 15 passes for 84 yards.

Barkley had third-down completions of 14 and 15 yards to Mason Kinsey on a field goal drive early in the second half. Barkley’s 12-yard touchdown pass to tight end Miller Forristall in the fourth quarter completed the scoring.

Barkley completed 5 of 8 passes for 54 yards. Neither quarterback threw an interception, though Woodside was sacked three times.

Atlanta’s AJ McCarron, the favorite to open the season as Matt Ryan’s backup, completed 5 of 12 passes for only 36 yards with an interception.

Davis Webb threw a 6-yard, tiebreaking touchdown pass to Devin Singletary late in the second quarter. Webb is vying with Fromm to be Buffalo’s third-string quarterback.

Both players had an extended opportunity to play with Josh Allen sitting out the preseason opener and Mitchell Trubisky playing just two possessions.

Jared Goff got off to a rough start in his and coach Dan Campbell’s debut with the Lions, nearly throwing an interception on his first snap and getting sacked to end the game-opening drive with a thud. Goff finished 7 of 9 for 56 yards.

Prater kicked a 48-yard field with 1:51 left in the fourth quarter to push the Cardinals into a 16-all tie. The Cowboys’ ensuing drive quickly fizzled, giving the Cardinals enough time to drive downfield and set up Prater’s game-winning kick.

Ben DiNucci threw a 1-yard touchdown pass to Brandon Smith midway through the fourth quarter to give the Cowboys a 16-13 lead.

Most of the stars from both teams — including Cardinals quarterback Kyler Murray and Cowboys quarterback Dak Prescott — didn’t play on Friday.

Eno Benjamin ran for a 6-yard touchdown to give the Cardinals a 10-3 late in the second quarter. 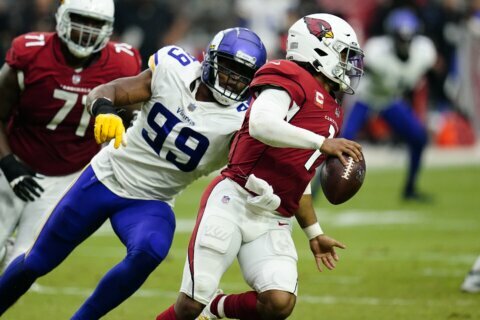 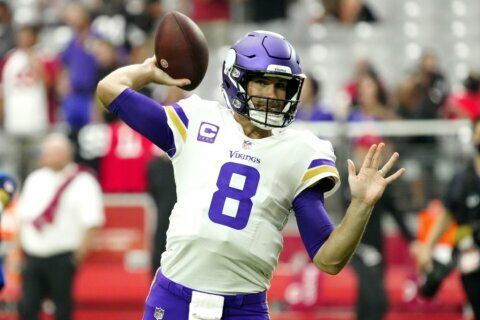