Car Report: Mitsubishi i-MiEV is the cheapest way to drive an all-electric car and stand out in a crowd 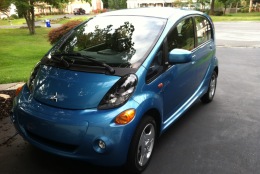 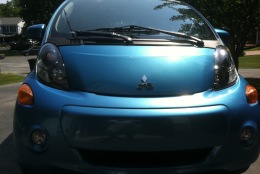 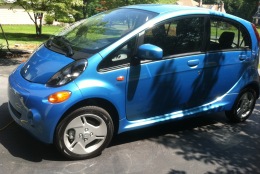 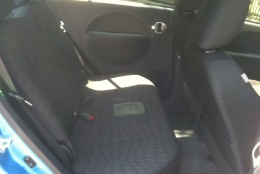 WASHINGTON — Electric cars are becoming a little more popular in the D.C. area. With more charging stations popping up, it makes driving an electric car less stressful than it was just a few years back. Until recently, the price of electrics has been a deterrent for some wanting to dump the gas station and trade it in for a power outlet.

Mitsubishi has a lower cost alternative called the i-MiEV with a price of $23,845 — and that’s before the $7,500 Federal tax credit — which makes for an affordable electric car. The i-MiEV is smaller than most cars and has looks that stand out. A friend said it looks like “some kitchen appliance.” It does look like it would fit right in on narrow European or Japanese streets, where space is at a premium.

The i-MiEV is a city car built for short trips and parking in tight spaces with ease. There is a 62-mile range, so long road trips are pretty much out of the question. But a daily commute with lots of stop-and-go driving is where this Mitsubishi makes sense. You don’t notice the lack of power like you do on the highway. From the stop light to stop light rat race, it seems like it has plenty of power. But once you get past 30 mph, you notice it only has roughly 66hp, and merging onto faster highways takes some planning.

The i-MiEV is happier on city streets and roads with lower speed limits, but I didn’t have much of a problem keeping up with traffic on I-95. Of course, the range tumbles the faster you go. On the highway, the car will track the groves in the roads and you really feel those big trucks when they pass you at higher speeds. The 15-inch wheels and tires are narrow and made for improved economy and lower rolling resistance — not sporty handling. This rear-drive electric car will not like fast, curvy roads and the tires will complain with ample squeals.

The i-MiEV has room for four. The rear seats are tight on leg room, so the smaller, the better for those riding in the back. The interior is basic with hard plastics and durable cloth seats, fine for shorter trips. There are heated seats in front. The interior is pretty quiet with just a little electric motor noise at lower speeds, but nothing like a car with gas engine. There is electric AC and heat. I turned off the AC to gain some mileage on a 59-mile trip to Baltimore and back.

The range is a downside for some, but my charge at home and plug-in at work always left ample juice. Charging can be slow: I charged on regular power at home and it usually took 14 hours or longer to gain a full charge. If you can use 240 volts, you can charge in less than seven hours. There is also a Level 3 quick charge port that will charge the car faster.

The 2014 Mitsubishi i-MiEV is different to look at and cheaper to buy than other electric cars. With an annual cost of just $550 to charge, it’s very cost effective to run the i-MiEV for city driving.

Mike Parris is a member of the Washington Automotive Press Association. The vehicles are provided by STI, FMI or Event Solutions for the purpose of this review. Follow @WTOP on Twitter and WTOP on Facebook.