High tides are getting higher, and tidal flooding is only going to get worse over the years, including in the D.C. area. That\'s what a new report from the Union of Concerned Scientists says.
Listen now to WTOP News WTOP.com | Alexa | Google Home | WTOP App | 103.5 FM
(1/4) 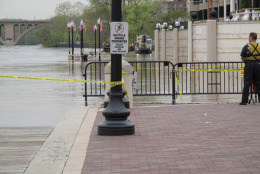 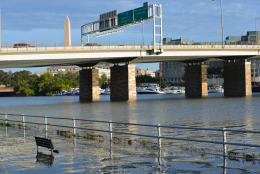 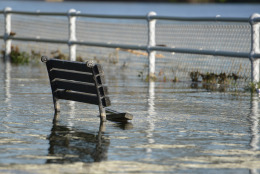 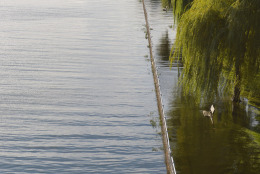 WASHINGTON — High tides are getting higher, and tidal flooding is only going to get worse over the years, including in the D.C. area. That’s what a new report from the Union of Concerned Scientists says.

Flooding isn’t limited to periods during and after torrential rains. On days when tides are extra high, bodies of water can spill over roadways, causing “nuisance floods.”

In 30 years, D.C. is expected to lead the East Coast in the number of tidal floods — nearly 400 per year, according to the UCS report, titled “Encroaching Tides: How Sea Level Rise and Tidal Flooding Threaten U.S. East and Gulf Coast Communities over the Next 30 Years.”

The report says high tides are affecting American communities more than ever before for two reasons: because coastal areas are more heavily developed than ever, so tides affect more people; and because sea levels, even when it’s not high tide, are getting higher.

“This flooding will redefine how and where people in affected areas live, work and otherwise go about their daily lives,” the report says.

The report was released Wednesday, the beginning of a three-day period that will see higher tides than usual, the UCS says in a statement. The Earth and the full moon will be the closest together they’ll be all month.

“That means that if there’s onshore wind, high tides during these days could cause flooding along the East Coast, even if skies are clear,” the report says.

“Sections of towns up and down the East Coast are now getting flooded simply when the tide is extremely high — something that rarely occurred in the past.”

The rest of the area faces a similar future, the report says: In Baltimore, tidal flooding is projected to increase tenfold, to 225 a year, by 2045.

In Annapolis, floods may triple by 2030, to 180 a year, then double again by 2045. The statement says that “parts of Annapolis would, after a point, essentially never be dry again.”

In all cases, the report says, flooding will not only be more common, but also more severe.

That last suggestion drew criticism from the libertarian Cato Institute. Patrick Michaels, director of the institute’s Center for the Study of Science, tells WTOP “the report’s claim that a national strategy to ‘reduce heat trapping emissions’ will have any significant effect is clearly an overstatement.”

Michaels says that the Environmental Protection Agency’s models project that “if the U.S. reduced all of its carbon dioxide emissions to zero today, and held them at zero through the year 2100, that the amount of warming that would be prevented