Off the 8s: My life as a pirate (Photos) 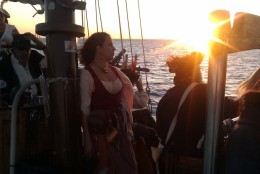 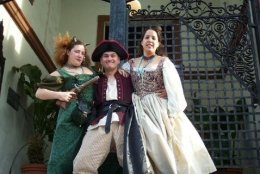 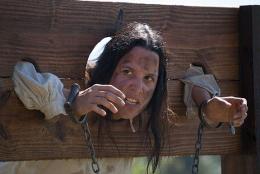 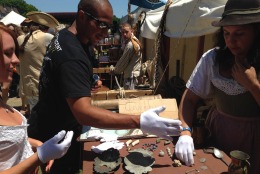 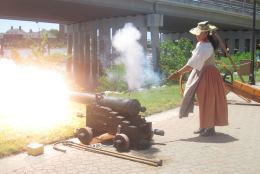 Editor’s Note: WTOP anchor Michelle Murillo moonlights as a historical re-enactor when she’s not working at the Glass-Enclosed Nerve Center. This is her story.

WASHINGTON — “What do you do in your spare time?”

That’s the answer that usually elicits a blank stare or a pause as the person waits for the punch line.

Instead, I pull out my iPhone and show them a picture or two.

Perhaps a better answer to the question would be: “I’m a living historical re-enactor with special focus on the pirate Mary Read and the sinking of Port Royal, Jamaica.”

I have a feeling that, without a lot of explanation, that would still get the same blank stare. So, how about I offer up an explanation instead?

My foray into piracy began 11 years ago. As a reporter in Florida, I took an assignment to cover a pirate festival in Key West. While I could have just done interviews and put stories together, I’m still a kid at heart, so I thought it would be much more fun to dress up and join in the festivities.

It was, and I was hooked.

I’m not so much into the rum-drinking and yelling aspects of piracy. I prefer the history, which is funny since I wasn’t a big history buff in school.

There is something about standing in the middle of what felt like a different moment in time that made history fun and exciting and left me wanting to learn more and become a part of it.

So I started my trek towards becoming a living historian and pirate re-enactor.

This can take on different meanings depending on the person in costume. They include

I fit in that last category.

What do I do? A few things.

I often perform as the female pirate Mary Read. She was fierce, but fascinating. You can read my version of her life history here.

I’ve written and performed stage shows about her life, as well as presentations for festivals and museums. Over time, I have pretty much become the go-to Mary Read for much of the East Coast and Bahamas.

Learning about Mary, I not only wanted to read about her life but also walk in her footsteps. I have traveled all over the Caribbean — from Norman Island in the Virgin Islands, to Green Turtle Cay, Abaco, Bahamas and Port Royal, Jamaica — to walk on the same ground and look out on the same horizons as she did.

And speaking of Port Royal, it was a hotbed of piracy in the late 1600s and early 1700s. It was also the largest trading port in the New World until June 7, 1692. On that day, a massive earthquake hit and a large portion of the city sank into the water. You can read more about the quake here.

In the 1960’s, an archaeologist by the name of Sir Robert Marx took to the waters of the sunken city and brought up thousands of artifacts. Many are in storage in Jamaica; others are housed at Texas A&M University, which did a lot of archaeological research there over the years. Private collectors also have a handful of items here and there.

I have more than a handful.

I’ve been collecting them for years, and I’ve had the pleasure of becoming friends with Marx. That friendship has helped me to expand my extensive collection. I also do something most museum curators will cringe at: I take the artifacts with me and let people hold them.

This way of doing things comes from my love of hands-on learning. While seeing an artifact in a glass case is nice, being able to feel the weight of it in my hands and hold it helps me to imagine where it was 322 years ago. This is a different kind of experience that truly brings history to life.

I also do a show for kids, where I teach them about the sights, sounds and smells aboard a real pirate ship. Here’s a hint on the smell front: There were plenty of live animals on board and no bathing. To say the least, it was not pleasant.

As a living historian, there is nothing like watching a child’s eyes light up as I hand them a real cannonball and they feel just how heavy it is, or seeing them get excited as they learn how to pull on a rope as a team to complete a task on the ship. Even better is watching kids jump and down and then stare, mouths open wide, in amazement when we fire a real cannon.

Being a pirate as a hobby has also allowed me to do some fun and wonderful things, such as sword fight on the deck of a pirate ship, sail around the Caribbean, send people off the plank into the ocean and be lectured by the prime minister of the Bahamas about my criminal ways.

It has also been my avenue to meet some of the most wonderful people I know, who are just as full of life and wonder as I am. Yes, most of my closest friends are pirates.

So, with that, let me leave you with the piece of pirate trivia I shared with the newsroom last week.

Why did pirates wear eye patches?

It was a tactical move on the ship. Because it was so bright during the day thanks to the water’s reflection, it took a while for their eyes to adjust below cabin. That is, unless you had one eye already adjusted. Just move the patch and voila! Instant indoor vision.