Many military dogs are being left overseas (Photos)

War weary veterans look forward to being reunited with their loved ones, whether they stand on two legs or walk on four.
Listen now to WTOP News WTOP.com | Alexa | Google Home | WTOP App | 103.5 FM
(1/4) 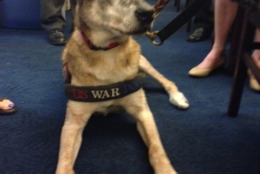 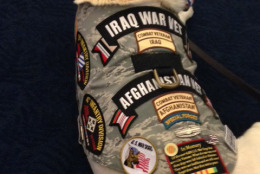 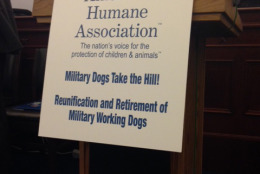 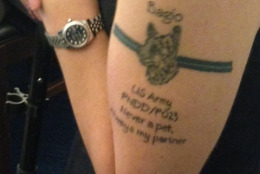 WASHINGTON — War-weary veterans look forward to being reunited with their loved ones, whether they stand on two legs or walk on four.

Yet many canine war heroes remain overseas, caught up in a protocol loophole.

“A number of dogs are already brought home once their tour of duty ends,” says Scott Sowers of the American Humane Association. “However, some are retired overseas.”

The American Humane Association is working to change the practice and is looking to Congress to help. Members of the organization had a briefing on Capitol Hill Wednesday.

The briefing started off late. It seems the dog veterans suffering from post-traumatic stress disorder needed a little more time to calm down and a few more pets and hugs from their owners.

War heroes such as the labradors, Thor and Cila as well as 7-year-old Belgian Malinois, Ryky were on hand to help urge Congress to bring all military dogs home.

“When they are retired overseas, they then become civilians,” says Sowers meaning they cannot be brought home on military transports or on the military’s dime.

Contractors who also rely on dogs often leave them behind too.

“He is not a pet, he was my partner. He’s not a dog, he’s a soldier,” says an emotional Kathleen Haybig, U.S. Army Specialist.

She adopted her partner, Bagio, after they both returned from combat and wears a tattoo of him on her arm.

They all need to come home she says, “because just like us, they are veterans too.”