Women behind walls: A look inside Md.’s Jessup prison for women

In the past 25 years, the number of women caught in the criminal justice system has skyrocketed, according to the ACLU. WTOP takes a look inside the Maryland Correctional Institution for Women in Jessup.
Listen now to WTOP News WTOP.com | Alexa | Google Home | WTOP App | 103.5 FM
(1/11) 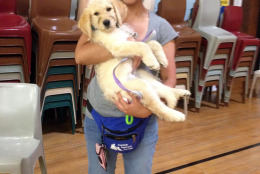 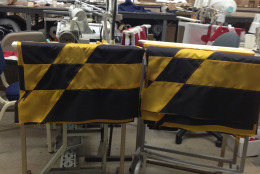 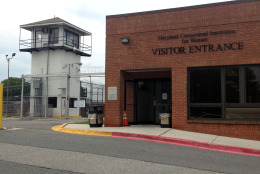 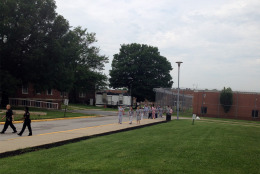 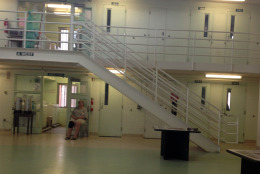 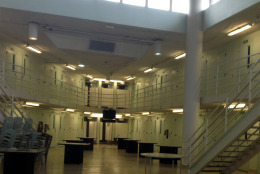 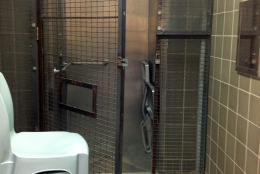 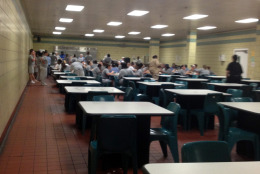 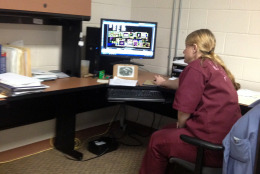 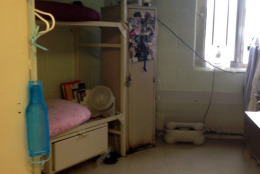 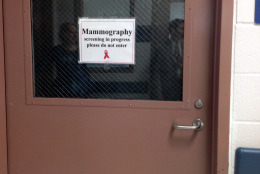 Editor’s Note: WTOP reporter Lori Lundin spent a day at Jessup Correctional Facility for Women to get a firsthand look and to speak to some of the women inside.

When Dayani was 17, she was a drug addict.

“Me and two other people decided to rob some drug dealers for some drugs. And the robbery went wrong and somebody died,” she says from inside Jessup Women’s Correctional Facility in Maryland.

Raised in Montgomery County, but locked up since she was 17, Dayani has grown up in prison. Now 32, gaining wisdom and clarity, she fully owns what put her there.

“I made a mistake. And this is what happened. I’m not the same person, but somebody died because of my crime. Somebody died, somebody’s child, somebody’s brother. And that’s huge,” she says.

Inside Jessup Correctional Facility for Women, every inmate has a job, whether in the kitchen, making Maryland state flags or something else. Dayani collects prison recycling, which she likes, because it involves moving around the facility.

“The more stuff that I do, the more moving around, the less I feel locked away,” she says.

She’s praying for a chance to reclaim her life.

In the past 25 years, the number of women caught in the criminal justice system has skyrocketed, according to the ACLU.

Many have been swept up in the so-called “war on drugs” and subject to long sentences. The number of women in prison is increasing at nearly double the rate of men.

The ACLU has found a reported 85 to 90 percent of women in prison have a history of physical and sexual abuse. Many turned to drugs to self medicate.

About 75 percent have mental health problems. Their involvement in the justice system often leaves many incarcerated women vulnerable to re-victimization.

“Unfortunately, when they get into prison, those histories of trauma and abuse often replicated within the prison itself,” says Amy Fettig, senior staff counsel for the ACLU’s National Prison Project.

By that, she means sexual assaults behind the walls, at the hands of prison staff.

Fettig says most women won’t report rapes and other assaults “because quite frankly, it’s always going to be the word of a prisoner against a correctional officer. Women are afraid of being retaliated against.”

Incarcerated women are routinely exposed to men watching them in the most intimate of circumstances like going to the bathroom or undressing. And for women who have experienced sexual abuse, it’s re-traumatizing.

“At a young age my parents died. I lost a child. I used drugs to cover up the pain,” she says.

From her experience, sexual assaults by guards is a common theme. She says she has seen it firsthand.

“Male officers will bring Victoria’s Secret garments in, and have sex with the women. Forcibly,” Craig says.

Sarah Shourd, one of three American hikers who were imprisoned in Iran, says while her experience was hardly a picnic, “In Iran, you will never have a male guard in a female section. For women that have already been through so much abuse and are often in prison in the first place because of an abusive husband, having male guards is cruel and unusual punishment,” she says.

Here in the U.S., there’s a serious lack of oversight according to Deb Golden, an attorney with the DC Prisoner’s Project.

If a guard gets caught, they can just go work at a different facility.

“We’ve actually seen that happen, where people have resigned rather than being investigated for sexual abuse and then get hired by another jurisdiction,” Golden says.

Unlike male inmates who often isolate themselves, women crave companionship.

“When they get to prison, they often form families. One person will take on the role of the mother, the younger ones often become the child,” says Jessup’s Warden Margaret Chippendale.

While Jessup has mostly female correctional officers, the majority of women’s prisons around the country have men guarding women.

If an abuse occurs, the women stay silent for fear of retaliation. They can be denied visitation privileges, get more time or be thrown into solitary confinement.

“Suicide is twice as high as in the general population. It’s also important to note that it costs two to three times as much. So we’re putting away people that already have mental illness.”

Shourd spent most of her time in Iran in solitary. She writes about in her recently released book, “A Sliver of Light: Three Americans Imprisoned in Iran.”

“After a few weeks my mind began to slip. I was disintegrating,” she says.

She calls the practice a dangerous control mechanism.

“It’s the harshest punishment that our system doles out besides the death penalty. And we really need to ask ourselves, why are we trying to rehabilitate people with this punishment that’s designed to break them,” she says.

Shourd is now advocating for change with the group Solitary Watch.

Two thirds of incarcerated women are mothers of a minor child. Often those children end up in foster care system or are subject to fast track adoption policies.

Women are receiving long sentences for non-violent offenses, which takes a toll not only on them but their families.

And if a women enters a prison pregnant or gets pregnant at the hands of prison staff, that can add a whole new dimension of trauma.

“My six week check-up was in the hall,” Craig says.

When she went into labor she “was shackled and handcuffed while giving birth. As a matter of fact, I was shackled with two pairs of shackles so my legs could be open and they shackled one leg to the bed bar, the other to the other bed bar. Disgusting. Disgusting,” she says.

Fettig says these kinds of things occur in part because the criminal justice system was designed for men. It doesn’t take into account issues that are unique to women.

“You have non-violent women being shackled at childbirth on a routine basis in this country. Including in Maryland and Virginia,” she says. “While they’re there the goal should not be to torture or degrade them.”

“We don’t permit (shackling during childbirth). We’re very progressive. And from my personal view, absolutely unnecessary. Why add the additional trauma.”

The Maryland Correctional Institution for Women in Jessup likes to consider itself to be the exception, not the norm. It houses about 800 female inmates.

With 81 programs, Chippendale says it’s a model for other women’s prisons.

“We’re very progressive. We’re very creative here. We’ve been very fortunate to have programming and money thrown into this institution.”

And when it comes to the challenges facing women as opposed to incarcerated men, Chippendale says “there’s a tremendous difference.”

The inmates can take courses from Towson-based Goucher College, as well as study graphic design, job and transitional skills and even yoga.

Most of the state and American flags in Maryland are made by inmates. Since most inmates will leave prison at some point, the aim is to help them put their lives back on track. The goal is to have them leave more educated, with job skills and ultimately become productive members of society, Chippendale says.

Dayani has taken advantage of a multitude of programs at Jessup. She’s earned a college degree, and has been very active in the prison’s Canine Partners for Life program.

“It’s really the only program where you can actually give back,” she says.

Inmates train puppies to become special assistance dogs for the disabled. The dogs live with the inmate 24 hours a day. They go with them to eat and they sleep in a crate in their cells.

“I cry my eyes out every time they leave. But I keep doing it because I love it so much,” Dayani says.

It’s a program that not only gives back but can really help the women heal.

“It’s lonely in here. And there are things that are completely frowned upon here. I’ve had friends that have been my friend for decades but I’m not allowed to give a hug or hold a hand. That’s where the love of a dog can fill a void,” she says.

Fettig says everyone should care about the growing female population in prisons.

“We can throw people away for years in prison. But 97 percent of all prisoners return to our communities. And it’s up to us to decide how they’re returned.

“Are they going to brutalized, raped, degraded while they’re inside and then returned to the community. Broken, distrustful with no job skills. Or are we going to treat them justly, humanely as we would want to be treated?” she says.