Woman gives birth on I-270 in Montgomery County 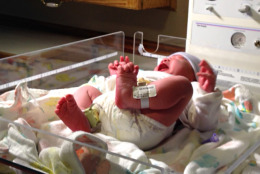 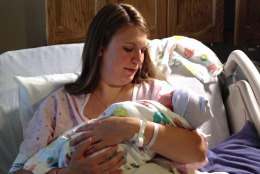 WASHINGTON — It was a special delivery on I-270.

Just around dawn, Atticus Noland was born along the side of the road, in the front seat of his dad’s Chevy Malibu.

Ann and John Noland hoped to make it to Shady Grove Adventist Hospital in time from their home in Frederick County.

But Ann’s contractions were coming hard and fast, and she knew it was too late. John moved over a few lanes of traffic, coming to a stop near the end of the ramp from Middlebrook Road.

It helped that John Noland had witnessed the births of his two older children, 5- year-old Genevieve and 2-year-old John. Another plus: he grew up on a farm and had helped from time to time when new livestock was born.

No Boy Scout training, but Noland says he was prepared, and had towels and other emergency supplies in the car, just in case. So the birth of Atticus was pretty much a textbook delivery — except for the fact it occurred on the side of a highway during morning rush hour, and his dad was the “doctor.”

John Noland called 911 once the delivery was complete, and then joked with the ambulance crew transporting his wife and new son that “they’re all yours.”

Mom and baby traveled with the EMTs to the hospital and dad followed in the Chevy Malibu. Ironically, that stretch of I-270 southbound is pretty much the same route John travels most mornings to his job in the Bethesda area. He says he probably will never look at it the same way again.

Atticus weighed in at 9 pounds, 7 ounces.