About 230 students and faculty at an Alexandria elementary school are sick with a stomach illness, forcing the school to close.
Listen now to WTOP News WTOP.com | Alexa | Google Home | WTOP App | 103.5 FM
(1/2) 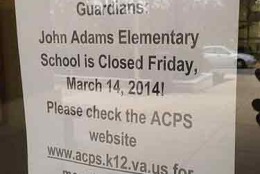 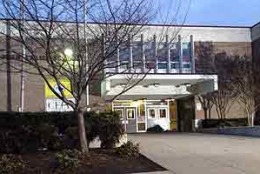 WASHINGTON — About 230 students and faculty at an Alexandria elementary school are sick with a stomach illness, forcing the school to close on Friday, March 14.

In the past two days, nearly 200 students and more than 30 staff at John Adams Elementary School called out sick and exhibited symptoms of nausea, vomiting and diarrhea, school officials say.

Chief Administrative Officer Tammy Ignacio for Alexandria City Public Schools spoke with members of the news media Friday and says the illness was first detected in the fourth grade wing of the school.

On Wednesday night, that area of the school was quarantined and cleaned but the virus still spread to other wings of the school by Thursday, according to Ignacio. After making the call to close school Friday, she says the facility will be cleaned “top to bottom” with a substance that consists of 10 percent bleach and the cleaning process will entail “the walls, the ceilings, the toys, the desks, pretty much every aspect of the building.”

The cleaning will be done in three steps.

“So if you miss anything the first time, you hit it the second and the third,” she says. “We’re also looking into a fogging process, which is very safe but it will kill the virus.”

School staff grew concerned Thursday when more than 100 students were absent from school and Ignacio says that number is “highly unusual.” In addition to those out sick, children and staff were in and out of the nurse’s office with vomiting and diarrhea. By lunch, the school determined this was a situation to get a handle on and a letter was sent home to parents.

John Adams Elementary consists of 820 students and 131 faculty on staff and is a pre-Kindergarten through fifth grade program.

The school is closed Friday so the facility and all shared surfaces can be cleaned and disinfected throughout the weekend. School is scheduled to resume on Monday, March 17.

The school is working in collaboration with the Alexandria Health Department to identify cases and prevent the further outbreak of this type of illness which is highly contagious and spread through contact with an infected person or through contact with contaminated food or objects. It is also known to thrive on surfaces such as doorknobs and lockers.

Many viruses and some bacteria can cause stomach illness or gastroenteritis, according to the Alexandria Health Department. The most likely cause at John Adams Elementary is a virus called norovirus.

Symptoms usually improve after two days but there is no medicine or treatment to shorten the illness. However, there are actions parents of students and the community can take to prevent additional people from catching the bug including:

Ignacio says she is “absolutely” optimistic school will be open on Monday but if kids develop symptoms over the weekend and it’s Monday, she adds, “Please, please keep them home.”

In addition to Friday, students at John Adams have missed nine days of school due to weather conditions during the 2013-14 school year.

Trump goes after Pence, McConnell in speech to party donors