Take a ride aboard an icebreaker on the Chesapeake Bay, keeping the waterways open for fishermen, school children and even emergency responders.
(1/3) 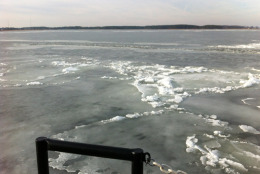 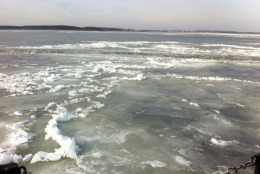 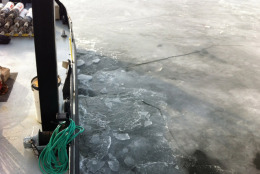 KENT ISLAND, Md. – If you’ve ever had to wait for the snow plows to clear your roads so you can get to work, you’ll understand what the watermen of the Chesapeake Bay have been going through this winter.

Some of the waterways feeding the Chesapeake Bay have been clogged with ice, so the Maryland Department of Natural Resources has sent out an icebreaker to clear the way.

Tuesday morning, DNR’s Hydrographic Operations crew headed out to break up ice along the Chester River, just off Kent Island. Captain Shawn Orr took the AV Sandusky out to work at 8 a.m. The icebreaker is named for former Baltimore Colt Alex Sandusky, an offensive lineman whose job it was to clear a path for Baltimore Colts great quarterback Johnny Unitas.

“There are a lot of watermen who make their living oystering, and in the winter they can’t get out,” Orr says. And when that happens, the watermen aren’t making money, and oysters disappear from markets and restaurants. That’s when the icebreaker heads out.

“Up here on the Chester River,” Orr says describing the ice formations, “it has a tendency to pack up. It has ridges.”

“I’ve worked here like, 11 years, and we’ve had three, maybe four, significant ice seasons where we’ve had a week or two of ice.”

Orr greeted reporters in a tee shirt, explaining that the Sandusky’s cabin is toasty-warm. Standing at the wheel in the cabin, he pointed out the ice on the river ahead.

Orr says he’s never been stuck in the ice but he’s encountered ice that needed several attempts to break through.

But the icebreaker serves more than just the watermen of the Chesapeake Bay.

Maryland Natural Resources Police spokeswoman Candy Thomson says ice-breaking also keeps the waterways open to first responders in emergencies, allows vessels carrying fuel to reach depots in Salisbury and Smith Island, and even allows the children who live on Smith Island to get to school in Crisfield or Ewell.

“Those kids could end up with a lot of snow days if we don’t keep the waterways open,” Thomson says.