Entangled eagles fall from the sky in Loudoun County

Two eagles fighting to the death fell from the sky while attached to each other in Loudoun County earlier this month, and one is now slowly returning back to health.
Listen now to WTOP News WTOP.com | Alexa | Google Home | WTOP App | 103.5 FM
(1/2) 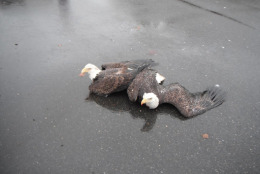 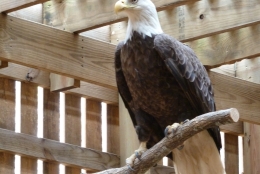 WASHINGTON – Two eagles fighting to the death fell from the sky while attached to each other in Loudoun County earlier this month, and one is now slowly returning back to health.

“It’s a spectacular thing to see, and very rare for them to land on the ground still attached like that,” says Dr. Belinda Burwell of the Blue Ridge Wildlife Center, where the recovering bird currently is housed.

The two adult males, spinning in the air, likely were fighting over nesting territory. Their talons became entangled and Loudoun County Animal Control officers had to separate the two after finding them Oct. 11, Burwell says.

Removed from the endangered species list in 2007, bald eagles are now thriving, and the Blue Ridge Wildlife center is seeing more come in for care.

“I think as their populations increase, there are going to be more of these territorial battles. This one took place on the Potomac,” Burwell says.

One of the birds, in better shape, was released last Saturday.

“The second bird is healing up. He had some deep puncture wounds to his chest and his feet,” Burwell says.

The still-recovering bird likely will be released in the Shenandoah Valley to keep the pair separated.

Interested members of the public will be able to watch the bird’s release. The wildlife center plans to post details on its website about the event in the next week or so, Burwell says.