As far as Molly Ryan knew, she was headed to Coors Field in Denver with her family to see the Rockies take on the Arizona Diamondbacks. She didn\'t know the day would change her life forever.
Listen now to WTOP News WTOP.com | Alexa | Google Home | WTOP App | 103.5 FM
(1/6) 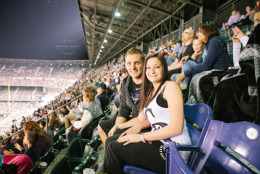 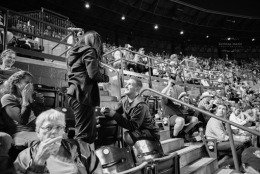 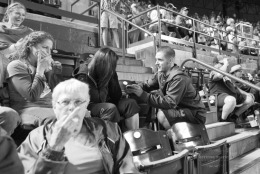 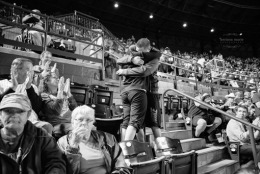 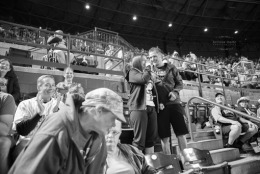 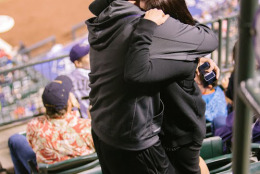 Editor’s Note: This story includes an image of an obscene gesture, which some readers may find offensive.

WASHINGTON – As far as Molly Ryan knew, she was headed to Coors Field in Denver with her family to see the Rockies take on the Arizona Diamondbacks.

Ryan’s parents and her boyfriend, Kenny Lovelace, knew this was more than just a family outing. This was the night Lovelace was going to ask Ryan to become his wife.

Ryan expected him to pop the question soon, but didn’t know when it would happen. In fact, hours before the game at Taco Bell, she had been joking with her boyfriend of four years about his not asking her “the big question” already.

She picked up a hot sauce packet that just happened to say “Will you marry me?” on it and threw it at Lovelace, saying, “Even Taco Bell thinks you should marry me.”

The family made it to the field and all was set for the big night. Lovelace had the ring in his pocket and had arranged to have his proposal posted on the Jumbotron.

Also standing by was photographer Kerinsa Mullins and her husband, hired by Ryan’s mother to capture the special moment. They both sat away from the Aurora, Colo., couple so they could get great camera angles for the pictures.

Then the big moment arrived. Up on the big screen, the message flashed: “Will you marry me, Molly?”

Mullins was sitting near an older couple, a bit farther in from Molly and Kenny, and soon found out the older couple only cared about one thing: watching the game.

“As soon as I saw the proposal I stood up quickly to photograph and get a better angle and actually the man next to her [the older woman] yelled at me to sit down and so I quickly just said, ‘I’m sorry I am photographing a proposal behind you.’ So they knew what was going on,” Mullins says.

This photo shows Kenny Lovelace proposing to his girlfriend Molly Ryan at Coors Field in Denver last week, as a woman appears to flip the bird at their photographer. (Courtesy Kerinsa Mullins)

Ryan was beside herself as a nervous Lovelace took a knee.

“He got down on one knee and that’s when I realized it was me and I just started crying and it was a great moment,” she says.

As the special moment unfolded, Mullins says she continued to receive nasty stares from the older couple, whose view she obstructed.

“They kept yelling at me and I just ignored them because I was there to do a job and I did not want to miss something that would be so brief and so important,” Mullins says.

Ryan said “yes” and fans nearby cheered for the couple — everyone but the older couple, that is.

They continued to look unamused by the event. In fact, unbeknownst to Mullins, another woman who was there with them retrieved a security guard because she couldn’t get back to her seat.

Mullins says when the security guard arrived, the big moment was over and she happily moved out of the trio’s way.

It wasn’t until the next day that Mullins realized the unhappy couple left their mark on the photos.

“In about 20 of them, she and her friend are giving me the stink eye,” she says.

Then she saw one photo that she couldn’t believe. In it, the older woman appears to be giving the one-finger salute to the camera.

“When I first saw the image I laughed, but then I was terrified you know, wondering what the couple was gonna think,” Mullins says.

To Mullins’ surprise, the bride-to-be was elated.

“I couldn’t stop laughing. I said it was the greatest photo I’ve ever seen,” Ryan says.

She says it was a picture that showed a wide range of emotions.

“There is a girl sitting behind us that is so excited for us. My mom is crying, I’m crying, and Ken’s nervous and then there’s this lady flipping us off.”

Ryan, like most people, put the photo on Facebook where many of her friends questioned its authenticity.

“I keep making jokes that I’m going to put them on our ‘Save the Date’ magnets for everyone’s refrigerators,” Ryan says.

Ryan says others felt bad about it.

“Some people thought it ruined the moment, but I think it made it that much better,” she says.

As for the woman behind the camera, Mullins says, “I think it is just a little bit sad that she just couldn’t be happy for someone else’s joy.”

Ryan says if she only knew who this woman was, she would like to “make her famous. That would be great.”

She even says there will be an invitation to the wedding waiting for the woman, if she comes forward.

“I would love for her to appear in one of my pictures at the wedding. That would be terrific,” Ryan says.