In March, a Manassas man received a notice about an outstanding ticket and learned he was the victim of a human error.
Listen now to WTOP News WTOP.com | Alexa | Google Home | WTOP App | 103.5 FM
(1/3) 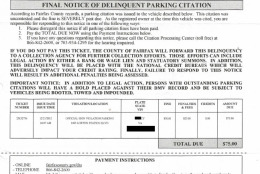 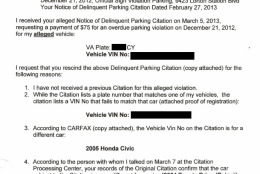 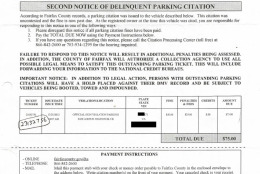 LORTON, Va. – In March, a Manassas man received a notice about an outstanding ticket and learned he was the victim of a human error.

The Fairfax County Police Department issued the ticket on Dec. 21 at 4:07 a.m. at 9423 Lorton Station Blvd. In early March, Daniel Peacock received a letter informing him about an outstanding ticket in his name with accrued penalties. The letter told him to pay up, or else his wages could be garnished, his car could be booted and his credit score may be affected.

“When I looked at the ticket, I was shocked. Eventually, I noticed a problem,” says Peacock.

“They had my plate number, but the VIN number was incorrect. So I went and Googled the VIN number and found out it went to a Honda Civic. My car is a Prius.”

Peacock contacted the number on the ticket and tried to show them evidence the VIN did not match the make and the model listed on the citation. However, a Duncan Solutions staffer told him he was still responsible.

The Fairfax County Department of Tax Administration outsources traffic ticket processing to Duncan Solutions, even though a Fairfax County seal appears on all tickets. Duncan has a local office in Rockville, Md., but calls to the toll-free number on the tickets go to Milwaukee, Wisc. Montgomery County also has a contract with Duncan.

“When I pointed out to them that the license plate and VIN didn’t match, they should’ve double checked their work, then noticed the error and dismissed my ticket. I don’t understand why that didn’t happen,” says Peacock.

Kevin Greenlief, Director of the Fairfax County Department of Tax Administration, admits there were several mistakes in Peacock’s case. He tells WTOP they regret the mistakes and apologize for the errors. Peacock’s ticket was dismissed, he said.

“As I am looking at the ticket, I would read the last letter on the license plate as a Y, based on the handwriting. In reality, the last is an X. It looks like a Y and that’s how it was inputed. Had it been inputed as an X, the ticket would’ve gone to the right driver,” he says.

Greenlief showed WTOP the original ticket, which does reveal a confusing last letter. Handwritten tickets represent less than 10 percent of all tickets in Fairfax County.

“Duncan checked the Virginia DMV on this ticket and it came back as a reject. The make and model didn’t match the license plate, that was the reject. They decided to do additional manual research trying to find it. They were researching based on an erroneous plate. What we’ve told them is from now on, if you get a reject, it stops there and turn it over to us,” he says.

“Their second effort was to just look at the license plate. The license plate is a valid license plate for a different car. But if you separate from the make and model, you can get a false positive. That’s what happened in this case.”

But Peacock’s frustration didn’t end there.

“Peacock is also upset with Fairfax County because of the quick succession of delinquency notices on the ticket. He showed us a series of three letters, received over four weeks in March that got progressively more threatening,” Greenlief says.

Peacock says he felt like he was being harassed.

“Their records clearly would show I was on the phone with them trying to resolve the issue and at the same time, I kept getting letters telling me to pay up, or else,” says Peacock.

Greenlief apologized to Peacock and explained it was a glitch in the computer system related to the discrepancy between the VIN, license plate and make and model of the car.

“The system is designed to send out letters on the 22nd, 40th and 60th day of the ticket issuance. Duncan put this ticket in late because they were having trouble identifying the vehicle. When they input it, the system looked at the original date of issuance and noticed it was behind and spewed out letters to catch up,” he says.

“It doesn’t happen very often. But I think the logical solution is to change it so the clock begins on the date of input into the system, rather than date of issuance of the ticket.”

Greenlief adds that customer service is vitally important in Fairfax County and drivers should get the benefit of the doubt if there are questions surrounding a ticket.

“Our Board of Supervisors demands we provide good customer service to drivers. In a volume business, you’re always going to make mistakes because we’re human. But how you respond to a problem is what speaks to good government. We believe that is vitally important,” he says.

While Peacock is still upset about how his case was handled, he says he’s heard WTOP TicketBuster cases in the District of Columbia and is happy that Fairfax County has learned lessons from his case.

“It definitely helped that WTOP got involved because it gave Fairfax County a reason to resolve my case. I am very pleased with the results WTOP got for me.”

If you think you’re the victim of a bogus speed camera, red-light camera or parking ticket in D.C., Maryland or Virginia, WTOP may be able to help you cut the red tape. Email us your case — along with documentation — to ticketbuster@wtop.com.