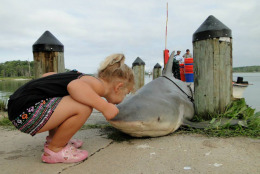 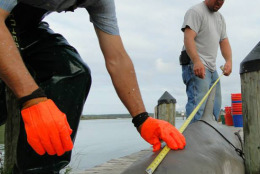 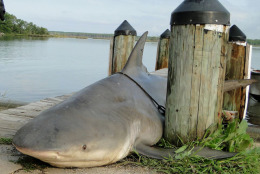 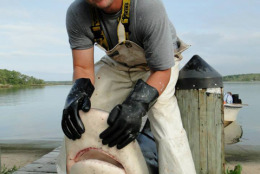 WASHINGTON – What started out as a routine trip to measure fish caught in pound nets turned out to be a shark event for several Southern Maryland watermen.

John “Willy” Dean, his son Greg Dean and Rich Richie, along with a Maryland Department of Natural Resources biologist, found two male bull sharks that weighed about 220 pounds each in nets off Cornfield Harbor, not far from Point Lookout State Park Monday.

“There was three of us on the boat the first go round with the shark and we knew just like that we had a shark,” Richie tells WTOP.

Experts say bull sharks are considered aggressive, but National Geographic says people are not on their menus, but can inadvertently get attacked.

The fishermen found the 8-foot bull sharks about 200 yards from where people were swimming.

“The second shark, he was pretty lively, he was a lot more lively than the first one was and we had a pretty big battle with him, getting him in the boat,” said Ritchie.

Bull sharks, according to the National Oceanic and Atmospheric Administration, can be found “primarily in shallow coastal waters.” They are “common in lagoons, bays, and river mouths.”

Cornfield Harbor is on the lower Potomac River at southern tip of St. Mary’s County, near the mouth to the Chesapeake Bay.

The bull sharks caught by the Deans were iced down and taken to Buzz’s Marina in Ridge, Md.

He said he doesn’t know why the sharks go into Cornfield Harbor, but is concerned they hang out so close to a Maryland state park, where people swim.

“So much for skinny dipping. If the snakeheads don’t get you, the sharks will,” he jokes with the paper.

According to the group, one shark will be studied while the other will be eaten.