Thirty years ago, the helicopters in the small MedSTAR Transport fleet would land near accident scenes, stabilize the victims and then get them to a trauma care center. Today, a MedSTAR helicopter patient is more likely to be someone who is in critical condition at a small community hospital and in dire need of life-saving, specialized care.
Listen now to WTOP News WTOP.com | Alexa | Google Home | WTOP App | 103.5 FM
(1/6) 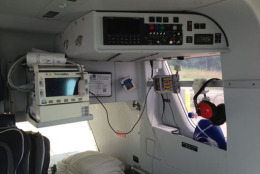 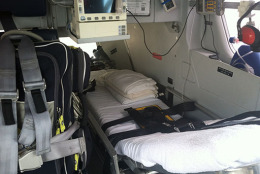 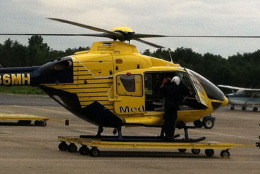 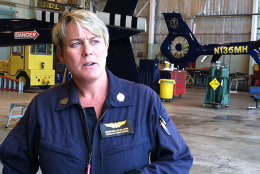 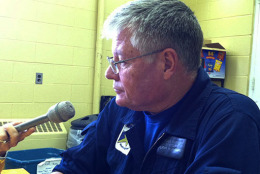 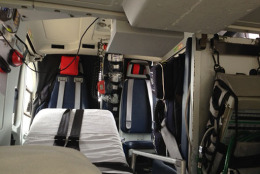 WASHINGTON – It’s a delicate choreography in the air, as MedSTAR 1 lifts off from its helipad at the start of another mission.

The blue and yellow helicopter is a frequent sight in the Washington-area sky. But this helicopter is not just any chopper — it’s a flying intensive care unit, transporting the sickest of the sick.

In a space smaller than an ambulance, specially trained nurses and paramedics care for patients. And they have been doing so for 30 years.

Paramedic Wade Smith, who was on the helicopter’s maiden flight on July 3, 1983, says the medevac team began with mostly adult trauma flights.

Thirty years ago, the helicopters in the small MedSTAR Transport fleet would land near accident scenes, stabilize the victims and then get them to a trauma care center.

Today, a MedSTAR helicopter patient is more likely to be someone who is in critical condition at a small community hospital and in dire need of life-saving, specialized care. These patients, who range from infants to 90 years of age, are those with severe injuries and burns or extremely high-risk pregnancies.

In addition, MedSTAR 1 Program Director Joni King says about half of the patients are heart patients.

According to King, the staff is specially trained to handle the most critical cases. All of the nurses have served extensively in trauma, burn or surgical units, and the paramedics are periodically rotated into trauma centers.

Over the last three decades, the MedSTAR 1 team has flown more than 55,000 missions.

Paramedic Barbara Brown was in the holding area at the hanger at Tipton Airport in Fort Meade, Md., when she began to hear a lot of chatter on the communications system.

“You could see the smoke from the helipad, and so we just started helping the trauma center get ready for mass casualties,” Brown says.

Within minutes, her team was airborne and on the way to the Pentagon. There, she saved the life of a woman who was dying from smoke inhalation.

It was a time for fast thinking. In that way, Sept. 11, 2001, was like any other day for the helicopter teams.

Once a call for transport comes in, team members scramble to gather any special equipment they may need. Then they are airborne in 5 to 6 minutes.

“You go on automatic pilot,” says Smith, who admits he has seen so much over the years that it has all become a bit of a blur.

While Smith and his other medical team members go on automatic pilot, Steve Schubert pilots the flight. He is the calm hand on the controls of MedSTAR1.

“I just drive the bus