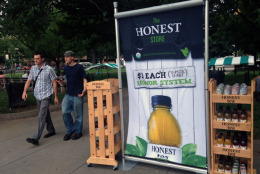 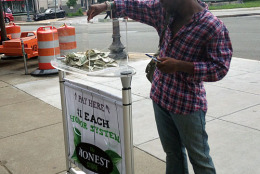 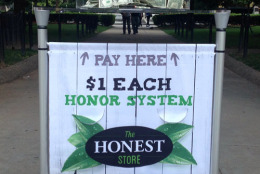 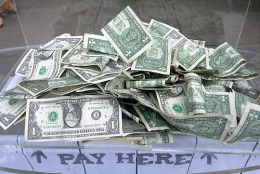 Refreshment beckons, but what’s the catch?

No one is collecting payments.

But people out of view are making note of the upright and the cheapskate.

This tea is entirely on the honor system. A see-through box sits atop a pedestal. The sign below reads: “PAY HERE $1 EACH.”

The Honest Tea company takes this informal experiment to 50 states and 62 cities. The intent is to highlight the most-and least-honest cities.

This week the tea showed up in Bethesda and in D.C.’s Dupont Circle.

“It’s actually a lighthearted social experiment where we put the honor system to the test,” says Patrick Jammet, director of field marketing for Honest Tea.

“We have people hidden around the area,” he says, pointing to young people with tablet computers on park benches. “They’re tracking not only whether people are buying or stealing but certain attributes about them.”

The observers are marking things like gender, facial hair, sunglasses and hats.

In past year, Jammet says 90-92 percent of people picking up a bottle of tea paid the $1.

At Dupont Circle, that trend seemed to be holding true.

“I think a lot of the good things people do are out of some sense of guilt or ‘I might get caught if I don’t do something nice,'” said a woman who just put a dollar in the box.

One figured she was being watched by a camera. Another worried about Karma.

The “Honesty Index” for the Washington area will be out later this month.