Trendy with a wild streak: The debate over hybrid cats (Video) 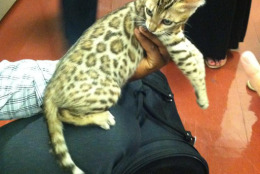 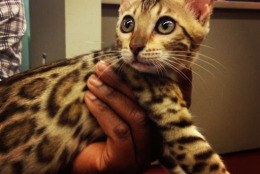 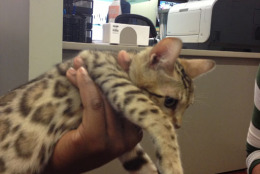 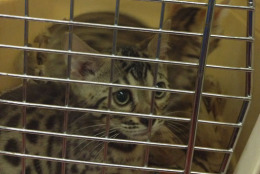 WASHINGTON — About an hour outside of D.C., dozens of Bengals sniff, stretch and strut through the Jungletrax Cattery, where 38-year-old Anthony Hutcherson breeds designer felines for curious and committed cat lovers.

Slender and sleek with green eyes and marbled fur, Bengals are the closest most people will ever get to wild cats. They are inquisitive, affectionate and expensive — kittens start at $500 and breeding cats at $2,000 — yet continue to be one of the most popular hybrids available as pets, according to The International Cat Association.

“I get calls from the owners of local sports teams,” Hutcherson says. “Priscilla Presley has a couple, Calvin Klein has a couple.”

Bengals were introduced as pets in the 1960s when a California breeder and geneticist named Jean Mill crossbred an Asian leopard cat with a domestic black cat. Eventually the trend grew, and Bengals are now in high demand for people who can afford them.

Hutcherson first set his eyes on the exotic creatures as a child. Like many little boys, he wanted to play with wild animals immortalized in books and movies. His parents weren’t thrilled with the idea, but eventually Hutcherson became friends with Mill and got his first Bengal in high school. He started breeding them in the 1990s.

Hutcherson now runs Jungletrax Cattery out of his home in Aquasco, Md. And because the average Bengal is intelligent and gregarious, he usually has his hands full.

“They like a lot of activity,” he says. “Anything that moves, wiggles or shakes is considered a toy.”

Despite their allure, some animal enthusiasts maintain that crossbreeding wild and domestic cats can cause unnecessary complications and risks. PETA warns against potential abuse in the capture and transport of wild animals. The Cat Fanciers’ Association refuses to recognize Bengals, Savannahs and other hybrids in its registry of cats, and says it has not been approached by breeders to consider a change.

“The Cat Fanciers’ Association, Inc., does not encourage or promote the breeding of non-domestic (wild) cats of any species to any domesticated cats” the CFA says on its website.

Scott Giacoppo, vice president of external affairs for the Washington Humane Society, says his group’s primary concern is cats that don’t find homes because of owners opting for designer breeds.

“Why would you allow any cats to be born right now when there are so many looking for homes?” he asks.

Surrounded by three Bengal kittens and their 4-year-old father, Poetic Justice, Hutcherson says his cats’ coats might make them look fierce, but inside they’re just like any house cat.

“The ideal Bengal should be a friendly domestic cat that is domestic in every way in terms of care, temperament and behavior,” Hutcherson says. “The only thing that should separate it is this incredible, vivid, wild [appearance].”

Bengals also have a lot of energy — so much that veterinarian Dr. Katy Nelson compares them to owning a Jack Russell terrier or a German Shepherd.

They need constant entertainment, she says.

“You’re taking on a project whenever you adopt one of these cats because they do have this wild instinct in them. Though they are beautiful, they require a lot of knowledge and special care,” Nelson says.

Hutcherson says his Bengals are about 17 generations away from their wild forefathers, making them more house cat than wild cat. The females weigh between 8 and 12 pounds, and the males between 12 and 16 pounds. His litter likes to climb high peaks and play with his dog.

“Cat lovers who are attracted to the exotic tend to like Bengals, especially when you realize you don’t have to create any special situations or circumstances to live with one of these,” he says. “You don’t need a big cage in the backyard or special permits.”

While Nelson suggests owning a Bengal on its own without other pets given their predatory nature, like any cat, Bengals can learn to love other animals — it just takes time and patience.

Hutcherson has other pets alongside his cats. He also breeds Toygers, which he says are very similar to Bengals. The only difference is that “instead of seeing a tiny leopard come out of your closet, you see a tiny tiger,” Hutcherson says.

While the trend of designer or hybrid animals is nothing new, Giacoppo says owners should consider whether they’re buying into the hype before bringing one home.

He says when animals have a big personality or unique traits, they end up being more than the owner bargained for and often can end up at shelters. Those looking to adopt should put more emphasis on finding the right personality fit with the animal, he says.

“It’s like judging a book by its cover. Yes, these cats are very beautiful, but do they have the personality and the temperament and the behavioral characteristics that you’re looking for out of a cat?” he says.

Hutcherson takes all of his cats back if the owners decide to change their minds, but not all breeders make the same offer. Nelson recommends checking rescue organizations and shelters if someone is looking to buy a Bengal.

She says a Bengal recently was given up to an Alexandria, Va., shelter, and it took a while to find a home for it.

“They are highly intelligent,” Nelson says. “They’re just not your typical cat.”

Watch the video below to see the Bengal kittens in action at WTOP: