Bear captured in NW D.C. released to wilds of Md.

A young black bear that was tranquilized and captured in a Northwest D.C. neighborhood Wednesday morning has been released to the wilderness in the western part of Montgomery County.
Listen now to WTOP News WTOP.com | Alexa | Google Home | WTOP App | 103.5 FM
(1/7) 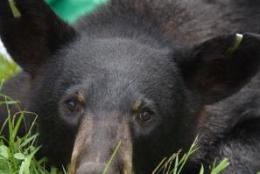 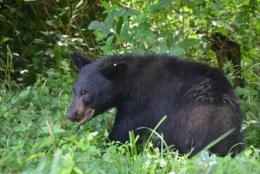 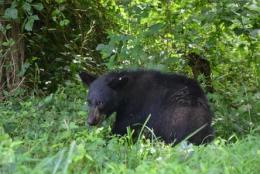 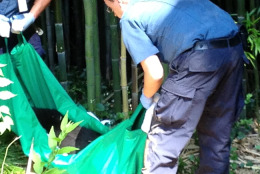 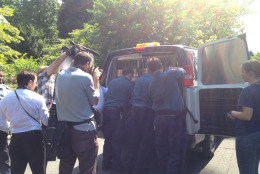 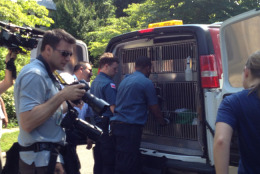 WASHINGTON – A young black bear that was tranquilized and captured in a Northwest D.C. neighborhood Wednesday morning has been released to the wilderness in the western part of Montgomery County, the Washington Humane Society reports.

The Washington Humane Society posted a video of the bear being released to the wild on its YouTube page.

With the help of the Maryland Department of Natural Resources and D.C. Department of Health, the bear was taken to western Montgomery County and released.

Watch the video below:

The Metropolitan Police Department says a resident called about the bear at about 8 a.m., and the department warned its Twitter followers about a bear running around in the Spring Valley neighborhood at about 9:15 a.m.

The woman, who asked not to be identified, says she looked out her window and saw the black bear.

She says when she called 311, the city’s information center, the response on the other end was “”What?! A bear?”

She adds the bear was just plodding along, seemingly in no hurry.

The bear, thought to be about 1 year old, was seen in the 4900 block of Rockwood Parkway.

The Washington Humane Society says the bear appeared frightened and proceeded to run through the backyards of many residential homes in the area.

The bear was captured after a two hour chase.

He and a few others carried the sedated bear in a green, cloth stretcher out of a stand of bamboo and into a waiting van.

“It’s not common, but it’s not unexpected,” Giacoppo says of the bear’s appearance in a residential area. “We are in a wooded area, near Rock Creek Park, that’s a thoroughfare for a lot of different wild animals. And, this time of year, they’re looking to find their own territory and resources to survive.

“Black bears are very harmless, they’re very timid,” Giacoppo says. “They’re actually very easy to frighten away. Simply by raising your arms up and screaming at them generally will scare them away, especially a young one like this.”

See video of the bear being transported by officials after his capture in a NW D.C. neighborhood below:

D.C.’s bear sighting comes days after bears were spotted in Virginia and Maryland.

On Monday, a black bear was spotted in a yard near Jarrett Valley Drive and Edgepark Road north of Tysons Corner.

According to the Maryland Department of Natural Resources, spotting a bear in the suburbs of D.C. is normal this time of year.

They offer tips on what to do if you do spot a bear.