Security in Washington-area transit and on the roadways is at a heightened level after the explosions in Boston.
Listen now to WTOP News WTOP.com | Alexa | Google Home | WTOP App | 103.5 FM
(1/3) 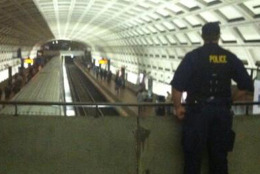 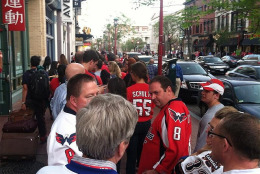 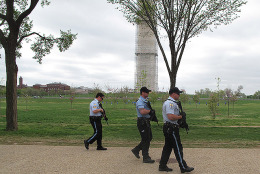 WASHINGTON – Security for Washington-area transit, arenas and on the roadways is at a heightened level after the explosions in Boston.

D.C. Mayor Gray says there has been no threat reported in Washington.

“We don’t have any credible information of any targets here in D.C., but we are well-prepared to defend residents and visitors,” Gray said at a press conference Monday evening.

Despite heightened vigilance, city leaders say Tuesday’s Emancipation Day parade will go on as planned. The parade starts at 11 a.m. at Pennsylvania Avenue NW between 3rd Street and 13 1/2 Street.

As a precaution following the Boston Marathon bombings, security is being enhanced for events held at the District’s Verizon Center.

“The safety of our fans and guests always has been and will continue to be our top priority,” said Verizon Center officials and the Washington Capitals in a joint statement.

The bag searches and manual security wanding that Caps fans are already used to is continuing, and other added measures both visible and invisible are being added.

Fans got their first taste of the stepped up security measures during Tuesday’s Caps game against Toronto. And fans who spoke to WTOP say they were happy about the changes.

Before the game, D.C. police officers made themselves very visible on the sidewalks around Verizon Center, and were seen checking nearby trash cans.

Metro Transit Police day-side officers were being held on duty until further notice. And additional patrols were on duty through rush hour Monday for security reasons, according to Metro.

“That will likely continue as we learn more about what happened in Boston.”

There is “no credible threat” against the Metro system and Metro security officers did this out of an abundance of caution, according to Stessel.

That number also is listed on digital boards around the rail system.

VRE also stepped up its security on trains during the Monday afternoon rush hour, asking security personnel to ride the trains and report to stations along the line, including at Union Station, where VRE officials are coordinating with Amtrak police.

Maryland Transit Administration is asking its passengers to report any suspicious activity or unattended packages to 410-454-7721.

D.C. police say they will remain in a heightened level of security as an extra precaution because of the events in Boston.

At a Monday evening news conference, Chief Cathy Lanier assured visitors and residents that the capital city is safe.

“Come down and enjoy events [tomorrow.] We will have enhanced security — some visible, some not,” Lanier said.

The Prince George’s County Police Department increased patrols near all critical infrastructures in the county in response to the Boston Marathon explosions, according to spokesperson Julie Parker.

The Boston Marathon had more than 26,000 runners, and many of them are from D.C., Virginia and Maryland.

To find relatives in Boston, family members should use this number, provided by Massachusetts Emergency Management: 1-617-635-4500.

Google is helping family and friends of runners find their loved ones after the explosions near the finish line. A site called Google Person Finder allows users to enter the name of a person they’re looking for or enter information about someone who is there.

The “Cavalier Daily Sports” at the University of Virginia reports U. Va. Club XC members running in the Boston Marathon are safe after explosions went off at the finish line.

Many road running clubs in the region who had runners participating are trying to reach their members by phone. In many cases, they were unable to get through.

Some local websites are filled with messages from people checking in to say they are OK and asking about their fellow runners. ARLnow reports some area residents are using the Facebook pages of running stores like Potomac River Running to keep track of where loved ones at the marathon are.

The Naval Academy Marathon team and a number of other Midshipmen runners and staff members have all reported in.

“The Richmond Times Dispatch is reporting Virginia Supreme Court Justice Bill Mims, from Loudoun County, was among competitors in Boston. In text to staff, he says, “I’m OK.”

Campus ministries is holding a small prayer service for students or those nearby Georgetown’s campus at Dahlgren Hall Wednesday evening at 10 p.m.

Hank Silverberg and The Associated Press contributed to this story.