Caps give back to families of fallen warriors

Washington Capitals players showed up at a skate party Sunday at the team\'s practice facility in support of families who\'ve lost a loved one in the military.
Listen now to WTOP News WTOP.com | Alexa | Google Home | WTOP App | 103.5 FM
(1/4) 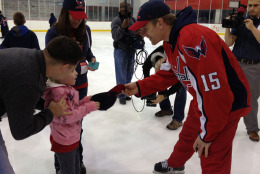 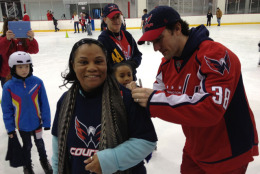 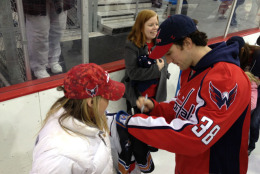 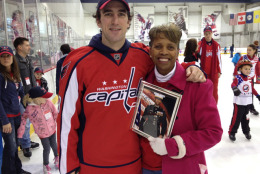 ARLINGTON, Va. – Washington Capitals players showed up at a skate party Sunday at the team’s practice facility in support of families who’ve lost a loved one in the military.

The event was hosted at the Kettler Capitals Iceplex by the Tragedy Assistance Program for Survivors (TAPS). The agency offers assistance to families of servicemembers. T-shirts and hats were sold at the party, with 100 percent of the sales going to TAPS.

“A lot of people forget how much the families sacrifice as well,” says defenseman Jack Hillen, after signing a few autographs and taking a few photos.

Hillen was the last of the players Janice Chance needed to take a picture with to say she had one with all four. Chance’s son Captain Jesse Melton III was a Marine was killed during a support combat mission in Parwan Province in Afghanistan in 2008.

“He was a wonderful man, and had a generous heart,” she said while holding a framed photo of her son in full uniform.

Jean-Marie Pearson has attended TAPS events with her three children since she lost her husband Captain Andrew Pearson in 2008 in Iraq.

“It’s a great opportunity for them to get out and be with other kids of fallen soldiers and just have fun, and know it’s okay to have fun,” Pearson says.

“He said that you should keep your skates tight, so you don’t end up moving,” Chris Pearson said, adding that it was his first time on ice skates.

Crabb said he was there out of respect for the families.

“Hopefully, we can make their day a little brighter at least for a short time,” said Crabb.

The event was the start of this year’s Courage Caps Program. Spokesperson Ami Neiberger-Miller’s brother U.S. Army Specialist Christopher Neiberger was killed in Iraq in 2007. She says what separates TAPS from other programs is the long-term care they provide.

“Many of these families, their children could come to the grief camp every years,” Neiberger-Miller says.

In its 19 years the organization says it has helped over 35,000 surviving family members, casualty officers, and caregivers.