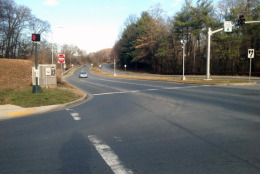 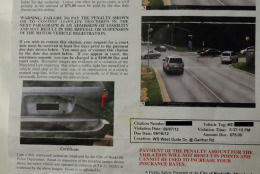 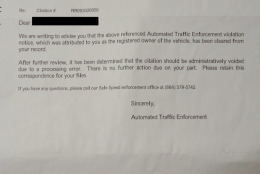 “This is outrageous,” says John B. Townsend II, AAA Mid-Atlantic’s manager of public and government affairs.

Overall, there also was a 105 percent jump between 2011 and 2012 for the full year, according to a WTOP and AAA-Mid Atlantic analysis.

Maj. Michael England with Rockville City Police confirmed the accuracy of the numbers with WTOP and explains it’s the result of new red-light cameras introduced throughout Montgomery County last August.

First, they capture drivers who are going more than 13 mph and stop with all four tires ahead of the white line, regardless of whether the driver backed up behind the line afterward.

Police say these drivers are violating Maryland Law TA 21-202 (h) that says drivers “must come to a complete stop at the near side of the intersection at the stop line or, if there is no stop line, prior to the crosswalk and before entering the intersection, and remain stopped as long as the signal is red.”

“It’s not intentional. If the driver were being intentional, they would go completely through the intersection. They were trying to do the right thing, but misjudged when the light would turn red. And to slap them with a $75 ticket, that’s patently unfair,” says Townsend.

“They always tell the public that cameras are meant to go after really dangerous drivers who deliberately speed and run red lights, but the real targets are ordinary drivers like you,” says Ron Ely, editor of StopBigBrotherMd.

However, Montgomery and Prince George’s County police tell WTOP they use a different standard.

When asked, Montgomery County Police Capt. Thomas Didone said his department throws away tickets every day for drivers who inadvertently stopped past the white line or crosswalk.

“We wanted to set a higher standard. That is the direction that’s given to all my approvers and that’s what they look for on the video to make sure,” says Didone.

Police in Prince George’s and Howard County also say the same standard applies and that they too throw away tickets under similar circumstances.

A second new violation in Rockville is the rolling right turn, or when a driver doesn’t come to a complete stop before turning right on red.

“Prior to the new technology, the violations we caught were those who are going straight through the light or making right turns on red where it was prohibited. So now we’ve added a third tier, those failing to come to a complete stop prior to the stop bar while making a right,” says England.

One driver WTOP spoke with found tickets like those troubling.

“I was floored. I am a safe and careful driver and as I approached this particular three-way intersection at West Gude Drive and Gaither Road on Aug. 7, I made the judgment that, since no traffic was coming from my left because the opposite intersection was turning left, this was a safe turn, ” says driver Maggie Lora in an email to WTOP.

Fortunately, she says Rockville City Police voided her ticket. The video below shows the specific traffic incident Lora was cited for.

However, Rockville City Police did issue 2,672 tickets at West Gude Drive and Gaither Road between August and December last year, a whopping 797 percent increase from the 298 tickets during the same period in 2011, according to a WTOP analysis.

“I was really angry. It’s over-interpretation of a rule and over-punitive. As I pull up to the intersection slowly while looking all around and there are absolutely no cars on any of the other cross streets which often happens after peak office hours are over, I see no reason to still completely stop only for the sake of the cameras,” says Arora in an email to WTOP.

“Ninety percent of the tickets we’re seeing across the country, according to some studies, for running red lights, are actually because the driver made a so-called rolling right turn on red. That shouldn’t be the case. These cameras were designed for people who run the red light and barrel through the intersection,” says Townsend.

Those studies took place in Los Angeles, Longview, Wash. and parts of Illinois.

A 2004 study from Texas A&M’s Transportation Institute (2004) found that accidents from these turns are exceedingly rare and don’t pose a serious traffic safety problem.

However, Rockville police say it’s about protecting pedestrians, bicyclists and others who use the crosswalk.

In Montgomery County, Didone tells WTOP police always look at the intention of the driver who made the turn.

“The direction our approvers are given is that we ticket those willfully disregarding others on the road, not for slow rolling right turns,” says Didone.

Prince George’s County can’t ticket such violations yet, but that will change later this year.

Maj. Robert Liberati, who runs the program, tells WTOP that the standard in Montgomery County is a good one.

“Criminalizing safe driving behavior for profit is immoral. Slow moving right turns are no more dangerous than any other driving maneuver most of us make every day. The problem of right turns definitely does not justify using a mass surveillance system,” says Ron Ely.