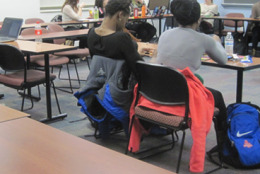 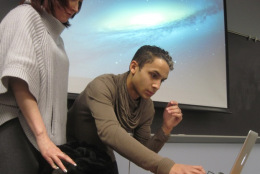 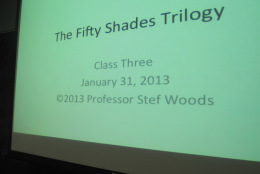 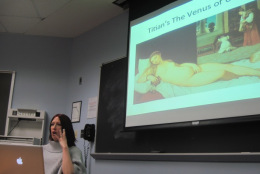 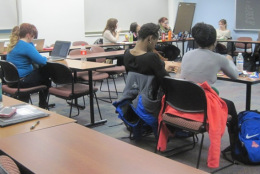 WASHINGTON – Students get made fun of for taking it, parents don’t believe it has academic value and readers familiar with the class’s required books are often repulsed by the subject.

“When they hear ‘Fifty Shades’ (most people) are like, ‘What? That book is trash. How’re you going to take a class on that?’ ” says Aubrey Maslen, an American University senior studying political science. “But then you explain that we’re using it as a case study to explore larger issues.”

The class of 25 students is filled to capacity and had a consistent waitlist, at times up to 11 students, until enrollment closed in January. Most students in the class are honors students or upperclassmen, and a majority come from the School of Communication.

American University adjunct professor Stef Woods, 39, proposed the idea for the course. Woods is a supporting member of the American Association of Sexuality Educators, Counselors and Therapists and a breast cancer survivor. She openly talks about her health experiences at events and on her blog, which integrates issues of sexuality and health.

The book details the relationship between Anastasia Steele, a young college graduate looking for a job who has limited sexual experience, and Christian Grey, a 26-year-old billionaire who sweeps Steele off her feet, doting on her with expensive presents and treating her like a queen. He sounds like a dream boyfriend, but there’s a catch.

Woods says when she read “Fifty Shades of Grey,” the first book in the series, her initial thoughts were far from teaching a course on it.

“When I first read the book, I kept saying how ridiculous it was since I personally don’t know of any 22-year-old virgin, who meets a 26-year-old billionaire, who then engages in a controlling relationship with her,” she says.

But then Woods saw the impact the trilogy was having on its targeted demographic — moms — and also the potential the series presented as a case study on public health issues, sexuality, social media and public relations and marketing — all subjects Woods has taught classes on at American. She says she began doing research and found that for a book with “unprecedented success in a digital age,” it would foster good classroom dialogue.

“I realized when it’s something on the cutting edge of popular American culture, and it can be used as a springboard for discussing larger academic issues, that’s perfect for a liberal arts education program,” she says.

In the first two weeks of the course, Woods says three students dropped the class after the 11-page, single-spaced syllabus became accessible online and after she explained how much work was involved.

Students will turn in a minimum of 25 pages of writing, develop a marketing plan, give presentations as well as rewrite one of the book’s chapters that come before any sexual content is introduced.

Woods says the class uses medical, law, women’s studies and sociology journals to explore 21st-century issues and then applies those issues to the assigned “Fifty Shades” passages that week.

During the third week of the course in late January, students turned in a sexual genogram, a pass-fail assignment that tasked them with exploring what has influenced their understanding of sexuality throughout their lives — from geographic and family influences, to religion, ethnicity and social media.

“A lot of sexual development issues can play a role into how we perceive our bodies, ourselves, our relationships with others, our own identity,” Woods says.

One student, Naomi Barker, a senior double-majoring in philosophy and anthropology, says it was one of her favorite assignments in the class so far.

“You can’t really talk about (sexuality) unless you examine your own relationship with it…,” Barker says. “People either talk about sexuality really analytically or very personally and not really in conjunction.”

A ‘Grey’ area of study

Marianne Johnson, a senior majoring in women’s, gender and sexuality studies, has taken Woods’ course about sexuality in social media. She says the experience was so positive that she waited to read the “Fifty Shades” trilogy until the start of this semester.

“The way she frames her course is in a really academic, really thought-provoking way,” Johnson says.

The only problem was convincing her parents the class would be of academic merit.

“They would ask me, ‘What are employers going to think when they see that on your transcript?’ ” Johnson says. “I would simply say, ‘being able to academically dissect a popular culture trend (and) best handle a culturally sensitive topic without making people uncomfortable.’ ”

The class is lot more complex than the course title suggests, Johnson says, adding that the book opens up room to discuss topics that can be embarrassing for some.

“I think it’s easier for us as college students to apply something that’s more relatable to us, whether (a) TV show or a book — when it’s on our level and is used in the frame of something we understand and enjoy learning about,” she says.

Barker says when she first read the book, she viewed it as a “poorly written romance,” and she couldn’t bring herself to pick up the second or third in the series. But the class changed her perspective.

The students spent almost the entire first class addressing the trilogy’s targeted demographic and why it is successful among middle-age women.

“The main demographic of people reading the book are women who juggle 8 million things at once and who kind of run their lives in their households,” Barker says. “It’s hard for them to remember what it was like to be young and free.”

Maslen, a senior political science major, is the only male in the class. He says the course drastically changed his perspective on the trilogy.

“If I had just read the book and not taken the class, I maybe would’ve bought into that this is a great archetype for the classic male, macho character,” he says. “But when you’re actually exploring some of the issues and the fact that the relationship is not healthy … it’s problematic that that’s something that’s so desired. I’m not really seeing what’s hot or sexy about it.”

He says topics from the readings and trilogy extrapolate during the two-and-a-half-hour class. In the third class alone, students brought up the socialization of birth control, abstinence, modesty, domestic violence, genital mutilation, pornography, stalking and more.

Students like Maslen, who openly identifies as a gay male, had a lot to say about society’s perceptions of sex during the class period.

“In hetero-normative relationships, society makes it so that the male should want sex all the time, and if you’re not, there’s something wrong with you,” Maslen says. “(Sex) is more than just an immediate desire that can be fulfilled because there’s so much more relationship-building that can be had.”

Topics discussed in class include how author E.L. James portrays the main heroine, Steele. In an interview before class, Johnson explains that Steele reflects how society looks at battered women.

“She is very intelligent, but she doesn’t have a lot of street smarts,” Johnson says. “She’s very dully written. Some of my classmates say that’s a way for the reader to insert themselves into the book.”

Johnson says the main male character, Grey, breaks all his set rules when it comes to Steele. For example, Grey allows her to sleep in his bed before or after sex, which is not his custom.

“She’s the different one, and she’s the special one, which is what every woman secretly fantasizes about,” Johnson says.

Woods says the book begs readers to ask themselves whether Steele and Grey have a healthy relationship.

“To the students, this is a controlling and abusive relationship,” she says. “To the mommy market and overwhelming majority of the women to whom this book was catered toward, they found it a wonderful fantasy that they clearly only took so seriously, but they enjoyed the escape.”