On a sunny Thursday afternoon, Staff Sgt. James Sides throws a mat on the white tile floor and plops down. He\'s about 20 minutes late to yoga, but his classmates don\'t seem to care. To his right, Cpl. Nathan Jakubison reaches his hands toward his left foot, making sure to avoid the metal pins sticking out of his shin. To his left, Sgt. Mike Nicholson, 23, has no legs to stretch over, but rather focuses on extending his spine.
Listen now to WTOP News WTOP.com | Alexa | Google Home | WTOP App | 103.5 FM
(1/10) 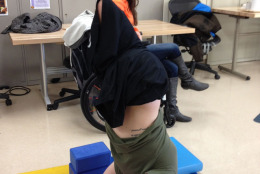 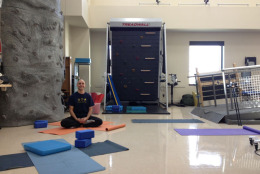 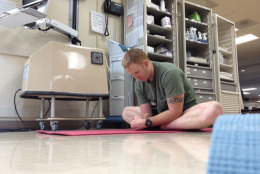 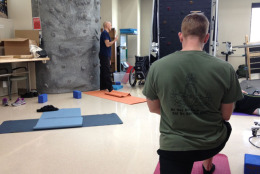 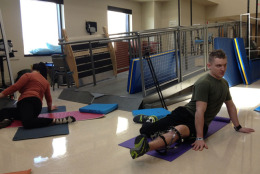 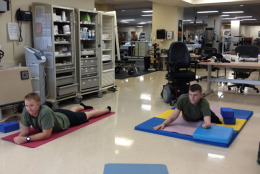 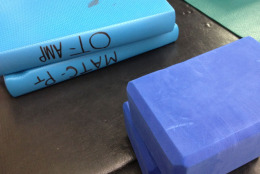 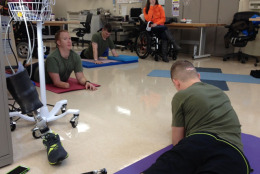 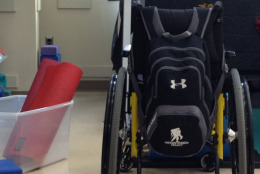 BETHESDA, Md. – On a sunny Thursday afternoon, Marine Staff Sgt. James Sides throws a mat on the white tile floor and plops down. He’s about 20 minutes late to yoga, but his classmates don’t seem to care.

To his right, Marine Cpl. Nathan Jakubison reaches his hands toward his left foot, making sure to avoid the metal pins sticking out of his shin. To his left, Marine Sgt. Mike Nicholson, 23, has no legs to stretch over, but rather focuses on extending his spine.

Everyone who comes to this Adaptive Yoga class held near the occupational therapy ward of Walter Reed National Military Medical Center knows the instruction is only meant as a guide. Each decides what’s best for his body, for his rehabilitation.

Sides, 30, can do most of the standard yoga moves, but he’s not here to improve his flexibility. For him, it’s about finding calm.

“I started noticing after about the third or fourth session, my phantom limb pain would go away. Or it would ease up just from doing yoga, from just not thinking about anything,” he says.

Sides’ right hand and wrist were amputated after he was injured by an improvised explosive device in Afghanistan’s Helmand province in July 2012. He also lost partial vision in his left eye from the explosion. He can still feel his hand that’s not there. It’s a normal sensation for those who have lost an arm or leg, he says.

“When I get tense or stressed, my hand acts up. I still have my hand. It’s still inside there. I can still feel my fingernails … My brain is still sending new signals and it doesn’t know your hand is gone,” Sides says.

While Sides works on relaxing his mind, yoga instructor Daniel Hickman offers the group a suggestion for the next stretch. Then he moves from mat to mat, modifying the stretch for each person.

After six years of teaching yoga at Walter Reed, Hickman has learned not to plan a class ahead of time. Instead, he goes by the abilities of the individuals who show up.

“I’ve taught several combat veteran amputees who are below-knee amputations or above-knee amputations, so there’s a lot of stuff we can do on the arms. But then, every once in a while, someone will walk in and they don’t have a hand. So there might be people without feet and an individual without a hand,” Hickman says.

Talking to each veteran about what he is feeling and how he can modify a move is important, Hickman says. But so is ensuring the environment is open and social.

“People ask me, ‘How do I even teach someone who has been blown up by a bomb or shot by a rocket and are missing parts of their body?’ And I say, ‘It’s no different from anyone else, you have to start where they are,'” he says.

The first to show up for Thursday’s class, Cpl. Jakubison tries to make it to each session. His right leg was amputated above the knee after he was injured in June 2012. His left leg sits in a “halo,” a metal brace that stabilizes his leg around the knee with pins.

Jakubison has spent the last eight months adjusting to his new body. Occupational therapy is a huge part of his day, so he uses yoga to release sore muscles.

“It’s nice to get stretched out and everything because the last thing you want to do is be injured like this and then you pull something, and it sets you back of your goal,” he says.

Only a half-dozen veterans show up for the yoga class, held in a patch of undesignated space off the occupational therapy room. It is not a typical yoga room. There’s no fountain, no tapestries on the wall and no mood music. Instead, Top 40 music blends with the sound of weights clanking together and the occasional trainer yelling in the background, “Give me four more!”

The yoga class is intentionally held in a corner of this busy room to make it visible and accessible.

“I think if it was pushed away into a room where it wasn’t seen, I don’t think it would still be here as long as it has been,” Hickman says.

Some veterans see the class as feminine or extraneous. By having it where those with preconceived notions can easily hear and see what it’s about helps break down whatever stigma may exist, Hickman says.

Veterans family members are always welcome to join the class. But Jakubison’s wife, Marli, decides to opt out this time. Instead, she sits in his wheelchair, repeatedly rolling back and forth as the class sprawls out on the floor. Her husband says class is not especially tough, but it’s effective.

“It’s enjoyable. It’s not difficult stuff. I’m not doing handstands or something, you know. I’m doing simple stuff that makes my body feel good,” he says.

The Adaptive Yoga class is part of the Exalted Warrior program that started in 2006 and works with Yoga for Vets, a national program that offers veterans free yoga classes in their hometowns.