One of the area\'s most beautiful, yet underutilized art deco movie palaces comes back to life this week, hoping to transport music fans back to an elegant, intimate moment in time.
Listen now to WTOP News WTOP.com | Alexa | Google Home | WTOP App | 103.5 FM
(1/3) 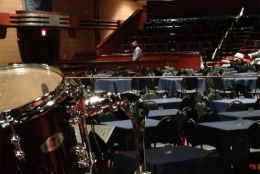 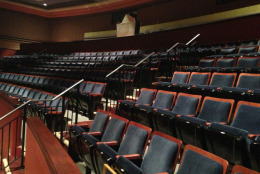 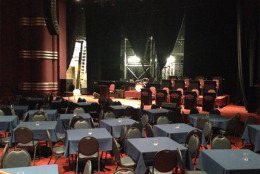 BETHESDA — One of the area’s most beautiful, yet underutilized art deco movie palaces comes back to life this week, hoping to transport music fans back to an elegant, intimate moment in time.

The Bethesda Blues & Jazz Supper Club opens to the public Friday in the former Bethesda Theater at 7719 Wisconsin Avenue.

Finishing touches are being made after an $8 million renovation of the 1938 theater, which is listed on the National Historic Register.

“I want people to come in and go out feeling like they stepped back in time,” says Ralph Camilli, director of operations, standing on the dance floor during a WTOP interview.

“Places like The Copacabana, The Latin Casino, where you could come in, have great meal, sit down comfortably, enjoy great music and performances in a very elegant setting,” says Camilli.

“If you’ve been to Blues Alley to get those kind of big names in a small room like that we had to, let’s say maximize our capacity, and minimize the size of our tables,” jokes Camilli.

The Bethesda Blues & Jazz Supper Club features seating at tables for four for 300 diners, as well as theater-style seating for 200 in the back of the hall.

“We’ve got bigger tables, more aisle space, you can spread out and relax and enjoy the show,” says Camilli.

Under the direction of Executive Chef Scott Mullen, entrees range from $18 to $35.

The vibe of the supper club reminds of Frank Sinatra’s ‘Songs For Swingin’ Lovers!’ album.

“I hope the ambience and surroundings motivate people to be a little dressier than usual … an opportunity to be a little more elegant and retro,” says Camilli, “although we live in a more casual period of time.”

Camilli says doors will open for dinner two hours before show time, with seating first come, first served — he hopes patrons will generally be done with dinner before the performance begins.

“We’re going to be strict about a philosophy I learned at Blues Alley and The Cellar Door — you have to be a listening club,” says Camilli. “The music has to be paramount. The artist has to be made to feel like it’s his room while he’s here.”

Club owner and proprietor Rick Brown recalled coming to the Bethesda Theater with his mother in the 1950s.

Brown is hopeful the supper club’s new focus will make the busy stretch of Wisconsin Avenue into a cultural destination.

“We think by adding a first class kitchen, a nice bar, and putting in table seats, we can create a different kind of environment,” says Brown.

“This is a historic area. With Giffords Ice Cream down the the street, the old Hot Shoppes on the corner, we’re really proud to be bringing this back to life.”

In its opening weekend, Bethesda Blues & Jazz’s performers include Irvin Mayfield and the New Orleans Jazz Orchestra on Friday, and Marcus Johnson on Saturday.