As the case of a disabled man who died in the custody of off-duty sheriff\'s deputies comes one step closer to resolution, an attorney for his family says a different approach should have prevailed

As the case of a disabled man who died in the custody of off-duty sheriff’s deputies comes one step closer to resolution, an attorney for his family says a different approach should have prevailed.

Frederick County Sheriff’s Office investigators have completed their inquiry into the death of 26-year-old Robert Ethan Saylor, of New Market.

Saylor died Jan. 12 after he was forcibly removed from the Regal Cinemas Westview Stadium 16. Employees said Saylor refused to either leave the theater or buy another ticket after seeing the move “Zero Dark Thirty,” and they called the deputies, who were working as security officers for Hill Management, to remove him.

Saylor cursed and resisted the deputies, and he was briefly handcuffed with three sets of cuffs linked together, according to Cpl. Jennifer Bailey of the sheriff’s office. Bailey said Saylor ended up on the floor during the struggle and had a medical emergency. He was taken to Frederick Memorial Hospital, where he was pronounced dead.

The Office of the Chief Medical Examiner in Baltimore determined last week that Saylor died of asphyxia and ruled his death a homicide.

Frederick County State’s Attorney Charlie Smith said his office received the sheriff’s report Wednesday morning. Smith and three assistant state’s attorneys, David Callahan, Nanci Hamm and Kirsten Brown, who heads the Violent Crimes Division, will each review the report independently before meeting with investigators and determining if more information or expert testimony is needed, he said. They will then decide whether to go forward with charges, issue a letter of declination or take the case before a grand jury.

In the interest of full disclosure, Sheriff Chuck Jenkins said, he wants to see the case go before a grand jury. But if Smith makes the decision, it will not be for that reason, Smith said, adding that grand jury proceedings are secret and would not lend themselves to transparency.

“If we have reason to believe that a final determination needs to be made by someone else besides us, that’s the reason we would take it to a grand jury,” Smith said.

He would not speculate on when his office will come to a decision.

“Obviously, we want to get this resolved as soon as possible for the victim and the officers, but we’re going to give it as much time as it deserves,” Smith said.

‘They could have just waited’

Baltimore attorney Joseph Espo, who is representing the family, said Saylor’s caregiver might have been able to defuse the situation, but the caregiver was outside getting her car to take Saylor home when the conflict started.

“They could have just waited a couple of minutes for Ethan’s caregiver to return to the scene and let her deal with it,” Espo said. “He was sitting in his seat, while admittedly not having paid for another ticket, minding his own business. It was not an urgent situation that required immediate attention.”

When the caregiver returned to the theater, she tried to intervene and de-escalate the situation but was ignored, Espo said.

“The deputies continued doing their thing,” he said. “They didn’t disengage.”

Espo said he and the family met with Jenkins on Friday and expressed their disappointment that the three deputies were still on duty.

“The decision to keep the deputies on regular duty was deeply troubling to the family,” Espo said. “Ethan died in their custody, and these officers just went right back to work.”

Jenkins has since placed the three deputies — Lt. Scott Jewell, a 23-year veteran of the department, Sgt. Rich Rochford, a 16-year veteran, and Deputy First Class James Harris, a 10-year veteran — on paid administrative leave pending closure of the case. Jenkins said the decision was in part a result of his meeting with the family.

Espo believes the deputies may not have been properly trained to deal with someone like Saylor. He takes issue with a 2011 training that dealt largely with mentally ill people and very little with the disabled — other than to help differentiate between the two.

“I was told that they had been given training about mental illness,” he said. “But Ethan wasn’t mentally ill. He was developmentally disabled, and the two are different.”

Espo and the family were waiting to see the results of the investigation before deciding whether to file a lawsuit, he said.

Paul Foss, head elder at Damascus Road Community Church, which Saylor and his mother, Patti, had attended for several years, said Saylor was a valued member of the congregation who loved hugs from his church friends. After learning of Saylor’s death, church members filled his seat with bouquets of flowers, Foss said.

Foss said Saylor’s arms were often wrapped around the neck of Senior Pastor Richard Fredericks as Fredericks greeted congregants. He would take advantage of the break between services to go see — and hug — his many friends, as well as enjoy the refreshments served in the lobby, Foss said.

Foss views Saylor’s death as a tragedy that could have been avoided.

“Someone with a cooler head should have said, ‘Let’s take a deep breath, and let’s come back to this in 10 minutes,'” he said. “If something could come out of this that can help this not happen in the future, I’m all for that.”

Denny Weikert is president of the Family Resource, Information and Education Network for Down Syndrome, which serves about 125 area families. Weikert’s office has been flooded with calls from members of the Down syndrome community who have been hit hard by the news of Saylor’s death, he said.

“It’s been devastating and of great concern,” Weikert said. “We’re overwhelmed. We had hundreds of inquiries (Tuesday) alone.”

Down syndrome groups around the country have referred callers to his office, Weikert said, and await a statement the group plans to release today.

Weikert, who met Saylor several times, described him as both mentally and physically strong and a productive member of society who had plenty to give.

“He had a job, and he was capable of doing a lot of what you and I can do,” he said. “He contributed in his own way.”

Saylor, a graduate of The Benedictine School in Ridgely, had worked briefly for Goodwill Industries.

Weikert said he was saddened by the tragic irony surrounding Saylor’s death. An enthusiastic supporter of law enforcement, Saylor collected information on different agencies and would call for deputies just so they could come to his house and talk to him.

“The part of society he trusted the most ended up being his worst nightmare,” Weikert said. 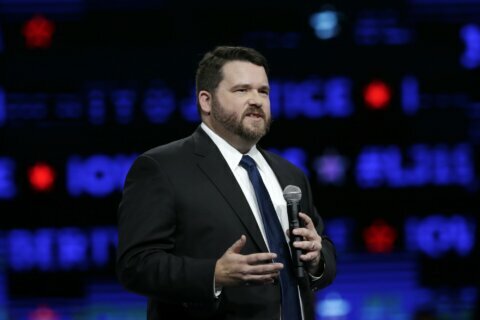 Amid hacking fears, key caucus states to use app for results

Fever chart: Earth had its hottest decade on record in 2010s