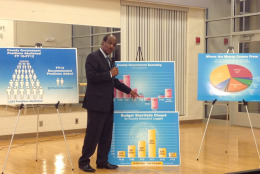 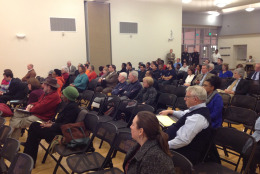 Montgomery County currently faces a $135 million budget shortfall, but many residents don’t exactly understand how the budget affects them.

“Whether you’re talking about public safety, schools, libraries or the transit system, all of those things impact you and the quality of life of our citizens,” says Leggett.

At the top of the budget debate is funding for Montgomery County Public Schools. At more than $2 billion, more than 50 percent of the county’s budget goes to education.

Under the “maintenance of effort” law in Maryland, counties are required to spend a certain amount per student each year. But, Montgomery County School Superintendent Joshua Starr wants $10 million more than the mandatory minimum under state law.

When asked about his position, Leggett wouldn’t comment about whether he endorses Starr’s position or if he sides with Councilman Phil Andrews, a Democrat who represents District 3 and opposes additional school funding beyond the minimum increase.

“I agree with Councilman Andrews. It’ll affect parks, police and fire and libraries,” says resident Frank Carrigan of Silver Spring. “They shouldn’t exceed the minimum in the face of other requirements. It would be advisable to maintain it at the minimum levels.”

On Thursday, a group of students from Argyle Middle School in Aspen Hill made a plea to Leggett to keep education funding up, stressing how after-school programs help keep children out of trouble.

“I am still not satisfied where we are today,” Leggett says. “The library hours are not at the level that I want. We do not have sufficient personnel to operate the hours and days we need. It is my expectation that we will continue to make progress as we go forward.”

Libraries, culture and recreation receive about $60 million, or about 1.5 percent of the county budget.

Rich Burnes says he came to the event to express concern about noise from the Intercounty Connector near his home on Bonifant Road.

“There are homes within 400 feet of the ICC that hear the traffic at all hours of the day and night, particularly in the winter with the leaves on the ground,” says Burnes.

Leggett told Burnes he’s been in touch with the Maryland Transportation Authority, but the agency told him they are within federal guidelines.

Leggett calls the noise problem “a tough fight,” but one that is worth fighting to protect the quality of life of those living near the ICC.

Editor’s note: This story originally stated that Maryland counties are required to increase funding to public schools each year.

Analysis: Trump has a go-to solution, and it’s more Trump

Why choice of running mate matters more than usual this year